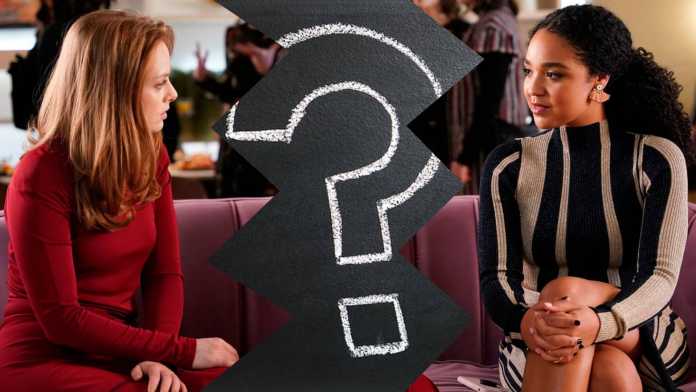 We all watch The Bold Type, right? We all love it, right? Sure, it has its problematic moments but as a whole it’s trying, it’s attempting to take on serious, important issues (like breast cancer, workplace inequality, political quandaries and more) that parallel current times. Which is doing more than many other shows on TV right now.

Recently, Freeform’s often groundbreaking series, made the dare I say bold choice to explore a romance between polar opposites Kat Edison (played by Aisha Dee) and Ava Rose (played by Alex Paxton-Beesley). Kat, an outspoken queer black department head, and Ava, a rigid conservative Republican whose father ran a conversion therapy camp become entangled in more than just political swordplay. The shock! The horror! You can come to your own conclusions on why this might be considered a toxic relationship for Kat to explore. But The Bold Type writers decided to go there. Almost instantly following the introduction of this unlikely duo there was an uproar from the audience outraged that this pairing is anything but ideal. Quickly, the show’s creative team scrambled to bury the storyline, even going as far as to change the season finale at the last minute to reflect the end of their courtship. Instead of leaving it open ended for the character’s to reconvene at a later time post their romp in the sack, Kat told Ava via text that she couldn’t do “this” anymore and that “it’s too complicated.” If it sounds like a cop out, well, you’d be right. It is.

After watching the finale, one question came to mind: Was it the right decision to kill this storyline? In short… no. Sure, having Kat thrown into this out of character rendez-vous with a conservative Republican lesbian seemed odd, perhaps even appalling to some… but is it really that far off from real life… are we doing a disservice to those actually in relationships like these. They do exist. I promise you that.

First and foremost, the fact that Aisha Dee spoke out about her character’s questionable choice, and more importantly the lack of inclusion behind the scenes when it comes to diverse voices telling these stories is beyond important. I respect and applaud her for starting the conversation surrounding this all too real issue within the entertainment industry. I agree wholeheartedly that writers’ rooms often lack perspective, they should be inclusive and showcase differing opinions, voices and people as whole. Especially those who are marginalized and left out of the narrative. I don’t question that call to action at all. It needs to become the new norm– and soon.

But why couldn’t this particular story be told in its entirety? As a woman who has struggled for the last four years with finding a balance within a relationship with another woman who doesn’t see eye to eye with me politically, it would have been interesting and extremely valuable to see how or even if this at odds couple could make this relationship work. Especially during today’s hostile political climate. Don’t get me wrong, I’m not blind to the problems surrounding any pairing like this… within my own relationship we come across tons! We fight about politics, we argue about values, we have even been close to parting ways because of our differing opinions. But we somehow still try to make it work.

Just to be clear, I’m not against networks doing the right thing behind the scenes, that’s a must. I am however against ruling out a story because it makes the audience uncomfortable. Are we not just as a result enabling our society even more by choosing to exclude and not portray these relationships on-screen? Leaving out the unconventional pairings that do exist in the world because it just doesn’t make sense to the masses. While I’m all for diversity– doesn’t that include portraying relationships that are not necessarily the norm or perceived as right. I have zero political alignments with my partner, yet we are still together. Yes, it boils my blood that she just doesn’t get it the way that I do… that she won’t be voting for the same candidate I am come November… but does that mean I’m not a worthy member of the LGBTQ+ community because I stay with her? Does that mean I’m mandated by society to dump her because she doesn’t think exactly like me? I’m not going to lie, it’s difficult to be at odds with your plus one most of the time. I wish she was passionate about causes that I am. I wish she would fight for the same things as me. But I can’t control her thoughts. Nor should anyone want to control their partner. We aren’t perfect by a long shot. We are constantly trying to navigate these muddy waters in critical life discussions and social circles, but sometimes you find yourself in situations foreign to you and you have no other choice but to roll with it. Wouldn’t a relationship similar to mine have been compelling to showcase on TV?

So, was The Bold Type attempting to promote a redemption arc on Ava’s part… I personally don’t believe that was their intention. I think they were trying to step outside of the box but it somehow got lost in translation. Despite the spotty execution, I interpreted it as an exploration of a relationship with extreme contrasting views and if it could last. Should it last? Maybe it wouldn’t. Maybe Ava would eventually show her true colors and continue to be harmful to Kat and the community. But, it was still worth telling. Much like Aisha, I wanted to start a dialogue about the storyline and its existence. We are all entitled to differing opinions and I encourage everyone to share them in a constructive way. You can choose to think The Bold Type was right to put an end to the Kat/Ava storyline. Hell, you can even think my relationship is weird, wrong, and unexplainable. That’s your prerogative.

I’ll leave you with this though… how are we supposed to unify this broken and divided country if we aren’t willing to listen to the other side, to have these difficult conversations in order to find a middle ground. Who knows, maybe in the end, we’ll change people’s minds for the better.