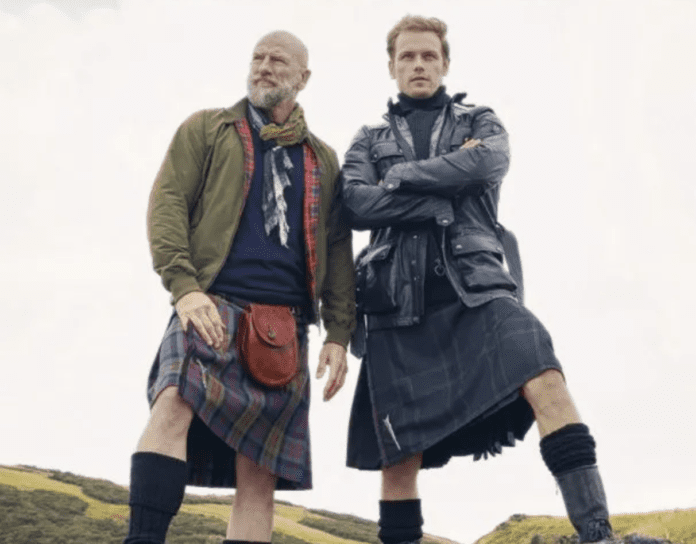 Calling all Outlander fans! I know we have all been suffering a major case of “droughtlander” and are looking for any fix we can find. Some fans are rewatching the past five seasons, while others might be eagerly awaiting Sam Heughan and Graham McTavish’s new show Men in Kilts, which will air on Starz. However, why wait?

This unlikely duo has not only filmed the new show, but they also co-authored a book titled Clanlands: Whisky, Warfare, and a Scottish Adventure Like No Other! Both men are part of the Outlander series, with Heughan currently starring as the devastatingly handsome and loyal Jamie Fraser, and McTavish, who played Jamie’s fierce uncle, Dougal MacKenzie.

Although their relationship on the show is contentious and tense, their real-life friendship is hilarious and endearing. The book follows their journey in Scotland from Glencoe to Inverness and the Culloden battlefield. Since my current travel plans have been indefinitely put on hold, no thanks to the pandemic, I’m excited to read about their adventure and hopefully add to my list of places to visit!

The book will cover their expedition as they dive deeper into Scotland’s rich history and culture. Based on their panel discussion at the recent NYCC Metaverse panel, there are sure to be some fantastic stories on the people they encounter and their road trip shenanigans along the way! For devoted fans of the Outlander book series, Diana Gabaldon has also written the foreword.

I can’t wait to get my hands on the book, which comes out November 3, 2020, and learn more about these two men and how this experience has brought them closer to their homeland.

Catch the official Men in Kilts trailer below.

Try not to chuckle as you check out the NYCC Metaverse panel from this past weekend here.

WATCH: Trailer for the Final Episodes of ‘The Walking Dead’