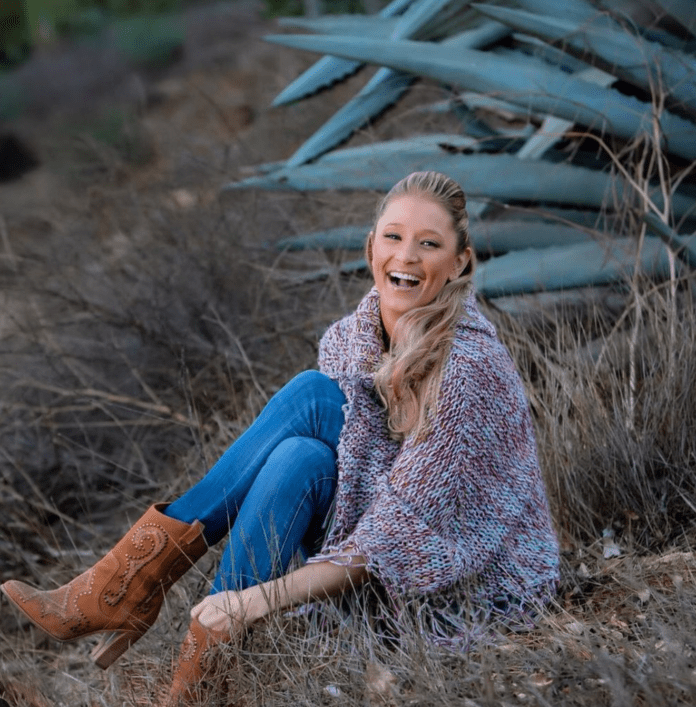 An animal rights activist who is fearless, unwavering in her convictions, and quite simply an all-around badass, Kristen Renton is as real as it gets.

Gabrielle Bisaccia: I see you pose on motorcycles on your social media. Based on the attire you wear, do you just model, or do you really ride?

Kristen Renton: That’s a good question! I do both, actually. I do have my license. I got my license back in 2010 and I got it specifically so I could ride with my dad, who’s been riding his whole life. I got him in a film with me and at the very end we get to ride together. Most of the ones where I’m dressed up and posing on the bikes, I did not ride though!

GB: Did you used to go on the back of your dad’s bike when you were a kid?

KR: He used to take me for rides. My mom wasn’t too thrilled about it, but I loved it!

GB: I read you’re into photography, which I also got into at the beginning of the pandemic to keep sane! What kind of photos do you take? What kind of camera do you prefer to shoot with?

KR: I love shooting nature. I’m not big on shooting people, but sometimes I like shooting animals because their expressions are so amazing. I’m much more into nature and scenery, though. I would go hiking with my girlfriend and we would call them our photo field trips and just find these awesome panoramic views. It’s so beautiful when you take a step back and allow yourself to pause for a minute and take it all in. I inherited my dad’s old film camera, which is a Canon from around 1968. I’m still learning how to use it because there is a lot that goes into it. I also love shooting on my iPhone!

GB: I see you have a lot of interesting and beautiful tattoos. Which was your first? Is there one that is most meaningful?

KR: It’s funny because I was very anti-tattoo growing up. Then my sister wanted to get one and I went with her. I’m sitting there and looking at the walls and thought, maybe I do want one, and so I got one! I ended up getting a seahorse. I always wanted to be a marine biologist and I love anything that has to do with the ocean and animals in the ocean. But the reason I got a seahorse specifically is because it was my little feminist thing. The male seahorse carries the eggs to give birth and that’s the only animal that I’m aware of in nature that does that. That’s where my brain was when I was 18, I guess! That was my first one and after that I just kept getting them because I became so addicted. They all are special and meaningful; I don’t really have one that doesn’t have a story behind it. But I got this one for Mother’s Day a few years back and it’s my mom and dad’s signatures on a Thanksgiving card they sent me a few years ago. My dad’s says, “Love you Sweetie” and my mom’s says, “Love you oodles” because that’s what she would always say to me.

GB: What led you to get so involved in Animal Rights?

KR: I don’t have a specific story or a catalyst that really got me into it. I’ve just always loved animals and all my babies are rescues who come from shelters. I think volunteering there and seeing some of the horrible things that these animals go through and situations that they come from like Dax, my Rottie, who we adopted in February, had been adopted out and taken back twice. The last time he was tied to a front porch with no food or water and just left there to starve. I think it’s just knowing all the things that I know about what really goes on in the world that has just lit a fire in me. I’ve met some amazing, phenomenal people in that world who are on the forefront of the fight. You always wish you could do more and save every single animal and put everybody in jail that needs to be in jail, but unfortunately that’s not how it works. So, the little bit that you do get to save and the cases that you get to see go through and the people that do get penalized keeps you going.

GB: Let’s talk about T11 Incomplete. The film told a very real and raw story, tackling both disabilities and LGBTQ+ themes. I really appreciated how they showed two broken people from very different circumstances healing each other. I also liked how they seamlessly tied in that Laura was queer without making it a huge focal point. How did you prepare for a role where you played a queer person who was disabled?

KR: With regards to the disability, I worked with a woman for about three months before we started shooting who had that exact injury. I learned so much that you don’t even think about. You see somebody in a chair and think, ok, you can’t use your legs, but you don’t think about everything else that goes into their daily life. Using the restroom, even just trying to reach something across the table comes with a very specific way that you have to brace yourself or you’ll fall over. All these little things that people don’t realize, really. I was lucky to work with her and I learned so much. It was important to me to make sure that it was authentic, and it was real because anybody who watches this film who has any type of injury like that where they are in a chair are going to be able to tell right away whether I did my homework and whether it is accurate. I really didn’t want to do them a disservice by not being as spot on as I possibly could. I was even at the point when we were shooting, I would text photos to the woman who’d been helping me of how my legs were positioned or certain situations and asked if it would be set up this way just to make sure I got her approval. I didn’t want to mess it up. With regards to everything else, with the character being queer and relationships, I got to meet with and discuss this at length with my director, who has a disability. She was a state trooper and lost her leg in an accident. She’s a lesbian and she and her wife, who was a producer on the film, were phenomenal during this whole process. We sat down and discussed different situations and it was wonderful to have all those tools at my disposal. That was a very important film for me to do as accurately as I could. And it’s one that I’m very proud of; it’s the most dramatic, real, raw film I’ve done.

KR: What’s funny is I based her largely on someone that I knew. The thing about Sons is that when you have a project that is so well written and the ensemble is so phenomenal, it’s so easy to do a good job when you’re surrounded by greatness. You elevate yourself up to meet where everybody else is. It was something that I just slid into because the scenes were so great, and they gave me such great dialogue to work with so I kept just thinking, ok, what would she do in this situation, and I just of just went with it. It was so much fun to play!

GB: What can you tell us about your new project, The Crickets Dance?

KR: It’s a beautiful film. It is a multi-level story; it’s a love story but it also has historical aspects where we go back in time and deal with a lot of hard topics like racism and slavery. Even in that time though, the main story is still a love story. It really transports you to a different time and a different place. I had a wonderful time filming it. We shot in Savannah at this beautiful antebellum that had a lot of history. It’s based on a novel of the same name. When I found out I was going to get this project I went out and got the book and I read it twice and the book is just as phenomenal as the movie.

GB: How closely does the film follow the novel by Deborah Robillard?

KR: The author, Deborah, and the director, Veronica, talked at length about how Veronica was going to adapt the screenplay from the novel and what was going to be included. I think it really followed very closely to the novel.

GB: How did you get involved in this project?

KR: They had approached me about playing Angie and my agent sent me the script and said to read it because they are interested. I read the screenplay and then I went and got the book and I loved it.

GB: Do you have any upcoming projects that you can share with our readers?

KR: I’m getting a little more behind the scenes. I’m working with a director friend of mine creating a book and a docuseries. I’ve been approached to participate in a docuseries as well. I’ll probably also come back to the front of the camera and do a little more with that too. Right now though I really like being on the creative side.