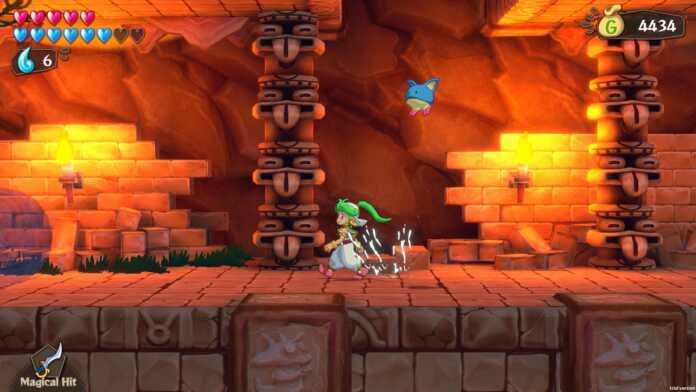 Wonder Boy: Asha in Monster World was originally released for the Sega Mega Drive in 1994 as Wonder Boy IV / Monster World IV. I’ll admit that I have never played the original, so this review will not attempt to compare the two – although I did watch a few gameplay videos just to get a sense of how the original looked and the changes made for this remake. That said, while Asha In Monster World definitely feels and controls a bit like a 27-year-old game, it features enough quality of life adjustments and world building to make it a worthwhile use of players’ time.

A hero named Asha rises from the most inconspicuous of places – a small, sleepy town far from the majestic  kingdoms she has heard of in tales. After completing her training in the Tower of Silence, Asha  heads to Rapadagna, where she is asked by Praprill XIII, the queen, to save the four captured spirits and defeat the powers of darkness.  Asha quickly agrees to this task and heads out on an epic quest to retrieve the spirits and restore order to the world. 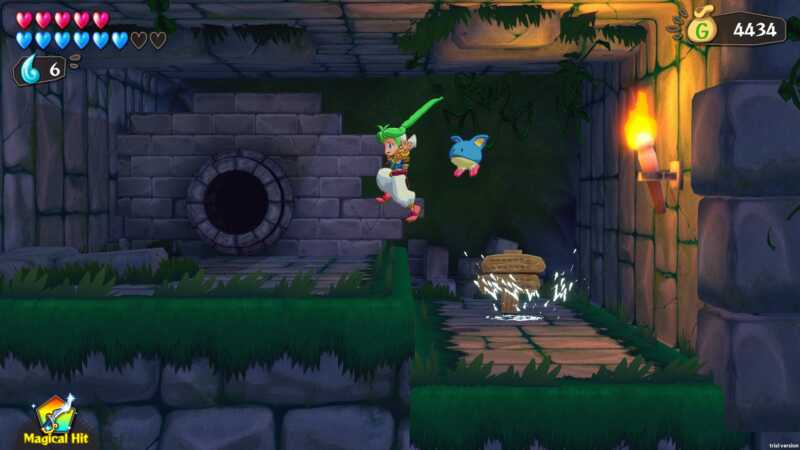 While simple, the story is serviceable and allows players to explore a wide variety of locations during the relatively short four or five hour long campaign. Ice pyramids, a water based sanctuary, a dangerous volcano, and a castle in the sky are just a few of the locations Asha will visit. Asha’s story is greatly enhanced by the variety of NPCs she encounters, most with unique personalities and funny quips. It is always wise to speak with NPCs between each level as a few will open new shops or update their inventory as the story progresses, providing Asha with helpful items. Specific NPCS will also begin purchasing some of the treasures that Asha finds during her journey.

Adding an air of authenticity was the fact that the dialogue remained in Japanese, while providing English subtitles, a nice nod to the origin of the original series and helps retain some of the charm of the original releases.

Asha in Monster World is a hack and slash action adventure and platforming game. Levels begin simple, but as you progress the temples become much harder to navigate and begin involving extensive platforming, especially once you obtain the Pepelogoo, a small animal which can be used to double jump and reach otherwise inaccessible areas. The Pepelogoo can be upgraded after the completion of each temple, allowing higher jumps and better glides. 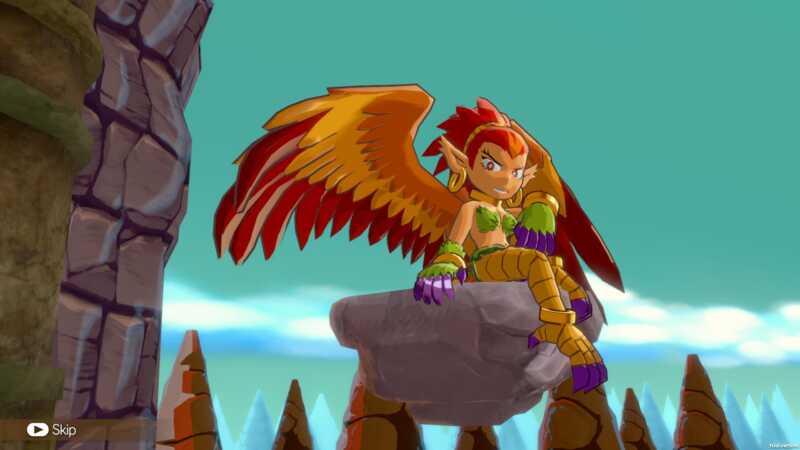 The Pepelogoo is really the center of the gameplay, as nearly every area after receiving the Pepelogoo revolves around its use. What seems at first to be a simple gimmick quickly becomes one of the most useful means of traversal, allowing for a surprisingly large amount of new ways to navigate the landscape.

Speaking of landscape, the world is beautifully detailed and presented in a quasi 2D/3D perspective with wonderful cell shaded graphics. While most of the time you will be following a linear left and right path, there are multiple ways to walk into the background and reach previously inaccessible areas. Finding these pathways and obtaining collectibles is one of the charms of the game, and I found myself spending entirely too much time in Rapadagna attempting to reach the tops of all the buildings.

Gameplay is fairly straight forward and normally consists of using the Pepelogoo to traverse, your sword to attack, and shield to block. New swords and shields are available from vendors as you progress and provide more damage output, quicker magical attack buildups, or provide better protection against various elements such as fire or ice.  While you’ll never feel overpowered while up against a boss, having the right equipment is definitely beneficial in trimming down fight times and some magical powered up attacks can knock off multiple chunks of health from bosses at once, giving you an advantage. 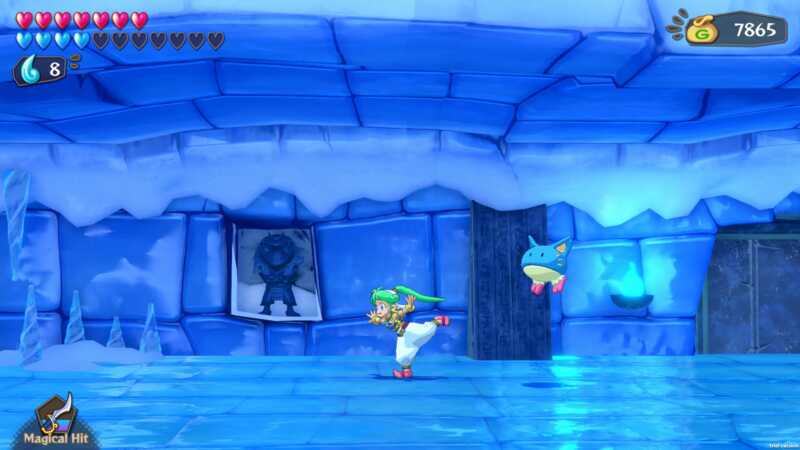 Speaking of health, you begin with a small amount but will find ways to upgrade throughout. Life drops, scattered throughout levels, can increase your health by one heart for every ten found. Additionally, various wearable items can increase your health. If you are low on health, you can use an elixir which will replenish all your hearts or find one of the various vending machines hidden in each level to purchase health restoration options. Between levels you can pray at any Sacred Statue to replenish all your health and avoid wasting an item which may be needed elsewhere.

The coins needed to purchase weapon upgrades can be found scattered throughout levels, by defeating enemies, or obtained by selling gold bars to a lady in the central town of Rapadagna. Coins are fairly plentiful, so you should always have enough to purchase the next sword and shield upgrade, although obtaining some of the wearable items or all purchasable options may require a bit of grinding to uncover every secret in a level.

While varied, levels can be frustrating to explore. There is a map, but it is only sometimes helpful as it is not very detailed. The camera cannot be manipulated to look up or down; so many times you will be taking leaps of faith and hoping to land where needed. This can cause you to repeat sections multiple times when attempting to get a jump correct, especially if you are trying to obtain all items. 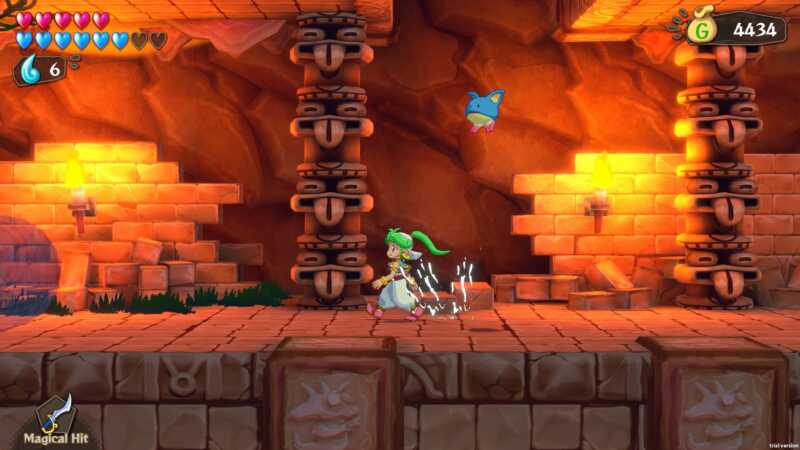 Despite a few criticisms, I found myself mostly drawn into Asha’s world. Being able to interact with NPCs and being given various dialogue choices helped lend a bit of personality to the game, and I especially enjoyed being able to say “no” to an NPC only to have them offer me more money for my items. The levels were fun to explore, the bosses were the right amount of difficult, and the game continued to move at a brisk pace – never allowing any one section to overstay its welcome.

For fans of the original, or even new players like me, I wholeheartedly recommend trying Wonder Boy: Asha in Monster World, you may find yourself pleasantly surprised at how well a game that is nearly 27 years old holds up when given a fresh coat of paint.

Special thanks to ININ Games and STUDIOARTDINK / G Choice for providing Fandomize with a review copy of Wonder Boy: Asha in Monster World.

‘Avatar: The Way of Water’ Teaser Trailer is Released