Synopsis: In a modern America where magic is real and witches are persecuted by US authorities, teenager Claire and her family are part of an intricate network that helps these women escape across the border to seek asylum in Mexico. However, when their mode of transport is disrupted by federal witch hunters, trouble befalls the family as they struggle to hide two young witches within the walls of their home. As witch hunters close in and strange magic begins haunting the family, Claire discovers that she may have more in common with these witches than she could have ever imagined.

Check out my conversation with Christian!

First of all, I absolutely loved Witch Hunt… I felt it was very timely.

Christian: Yeah, sthey did a study on what makes a hit song, and actually, a hit song reminds us of something older but then wraps it up in a new way. And I think it’s a really good definition of something that’s good. Backward and forward at the same time.

What was it like kind of bringing the Salem Witch Trials into the present day, while also talking about present day issues?

Christian: Yeah, well it’s sort of like one of the same, you know, the Salem Witch Trials were sort of like a way of controlling a group that is perceived as being out of control. And, in present day situations, if you just look at immigration, some people can make the justification of, ‘well, we got to control this group. They’re out of control. These people are trying to get into the country, let’s figure out how to stop that.’ And yes, in our current climate, there’s a lot of complexity involved in the political realm, however, when it comes down to just the basic humanity of treating people like people, like equals and respecting human beings and just the basic core principles of being a good human, we just get lost. And the same thing with the witch trials, it’s kind of like the only way we’re going to sort of be able to persecute these people is to pretend that there’s something non-human about them. And I think that’s sort of how we tend to sometimes look at immigrants or people coming into the country even though America is completely filled with immigrants. We’re all immigrants if we think about it. We all come from other places, unless you’re Native American, you know, so, we’re all one. And I don’t think that until we understand that we’re gonna always have these problems. So, you know, it’s all the same thing in some aspects. And then you have these familiar characters, like the character I play which is this sort of overzealous, righteous, ‘I’ve got a badge so that makes me right,’ you know, ‘I’m going to make your life hell,’ type. And these archetypes, I think, travel through different eras and different years and genres, and they all point to the same message: there is such a thing as right and wrong, and we’ve got to really grow up about it.

So, how did you come to be a part of this project?

Christian: I wasn’t super interested in playing just another bad guy because I sort of made my bread and butter by playing bad guys for a long time and it was sort of a ‘been there, done that’ kind of thing. But once I found out what the commentary would be bringing to this genre, I was like, ‘Oh, I’ll do this.’ And not only because of that, but also because Elle really seemed to know what she was talking about and she really had thought this through. And for a young filmmaker to invest so much thinking and time as opposed to just sort of trying to produce something timely, I really respected. And I think the industry needs more of that, more of that kind of thoughtful preparatory work before doing something, and she was really just well versed in not only the genre but also the political spectrum and what she wanted to tell, the stories she wanted to tell. And I just wanted to support that and, yeah, it was worth it. She put together a really lovely team of really good actors, and she just seemed confident. That confidence is a big thing, so I went for it.

You’re quite menacing in this role and it’s a little more on the subtle side which I really liked. Since you’ve played bad guys for quite some time, how did you approach playing detective Hawthorne?

Christian: I think that because there wasn’t a lot of psychological complexity in the script based around this character, he was sort of a character you could play very easily in sort of one way and I wanted to bring a little bit more of this old Dexter character that I played into this character. There’s plenty of backstory in that Dexter character that I played, and I’m going to bring a little bit of that into this character… And so I thought, ‘well, let’s try it a little bit.’ There’s some enjoyment and some quiet menacing moments that this character has and I just think it’s spookier to not go heavy handed, you know, to make it more like it is something that can actually happen to you, you know? But here’s the thing, when you’re driving down the highway and you see those lights go on behind you, the policeman pulls you over and it’s just that your heart goes, you know? It’s so easy, that unknown quality and the policeman walks up to the window and it can go either way, he can be completely nice or he can be a real jerk, and you have no idea but that power spectrum is all pulled into this image of this policeman and what is he going to be like. I wanted to play that line of subtlety because we didn’t know how psychotic he could get or maybe he’ll pull back. I wanted to keep you on the edge of your seat because if you came in just like he’s a real bad guy, then it’s not as interesting, it’s not as scary. 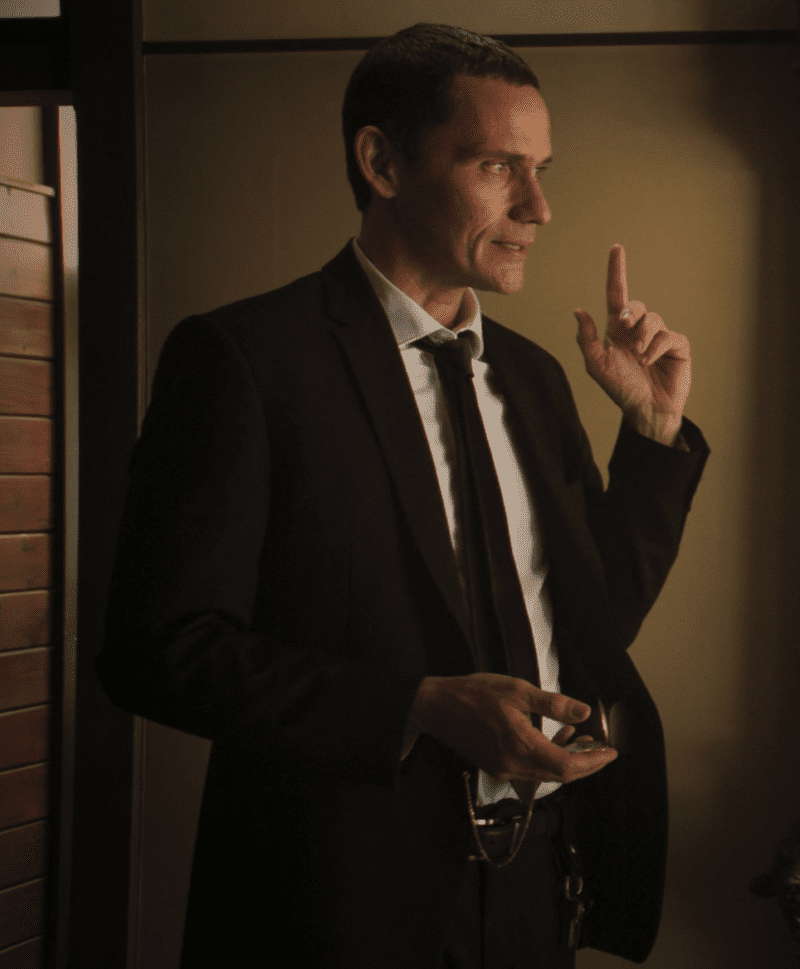 Oh, for sure. I think you did that very well.

Christian: Oh good, good. I also wanted him to not be completely psychotic, like he has to be human, he has to be this kind of righteous, ‘I think I’m doing God’s work,’ kind of being. And in order for the story to make sense, because I think he represents a lot of bigotry in the US, and that can be bigoted towards anyone, any race, any religion, and every side has bigotry, by the way, of the political spectrum. I think he just represents that, you know, he’s that one bad egg. I have a bunch of police friends because I spent a lot of time in New York and I had an old car shop in New York and I was in ground zero for a while and I just know a lot of them. I’d say, 99 percent are the best in the world and then there’s that one percent that are just jerks and they really do ruin it for everybody. He’s that 1 percent.

What was it like working with Gideon and Elizabeth?

Christian: Elizabeth and Gideon had a lot more time together to bond and be on set together and I sort of came in and out pretty quickly, and it was great actually because I didn’t really get to know Gideon very well. I knew Elizabeth, we worked together a long long time ago. So it was very nice to see her again. And I just think she’s the biggest sweetheart, but with Gideon, it was really nice to not know her, because I think that this character has made all these assumptions about this person, and If I’d known her more as a person, it would have been a little bit more difficult to play what I needed to play. So, I was able to sort of just keep her as a stranger in a weird way, which was really helpful. And what was also wonderful about both of them is that they just listen. And I think that’s a quality in American acting that is just getting lost. Actors feel that they need to fill every moment themselves without listening. And, maybe this is just too technical, but to find two actors that listen the way they do, makes them so wonderful, so relatable. There’s nothing more interesting than having or watching someone actually listening. It’s the most relatable thing. I think once you watch the movie and you start to look at the performances when people are actually listening or truly reacting to something that’s being thrown at them, that’s the interesting thing. It’s less what the person is doing or saying, it’s the more passive reception that is most interesting, you know, and they do it. They’re just so professional and Gideon, to be so young and have so much experience already, it’s pretty remarkable. So, yeah, it was fun. Elle really got a great group together.

That’s awesome! Yeah, a lot of the really great moments are in those quiet moments.

Christian: Yeah, I mean that’s where the scare is, like, you know, when there’s the creaking and everyone’s trying to be quiet, you hear creaking footsteps or like someone’s about to open a door, those are for me where I start ripping my hair out, like, I can’t take it anymore. It’s scary because it gives us, as the viewer, an opportunity to fill in our own anxiety. Those are so important.

Witch Hunt is now in Theaters, On Demand and Digital!