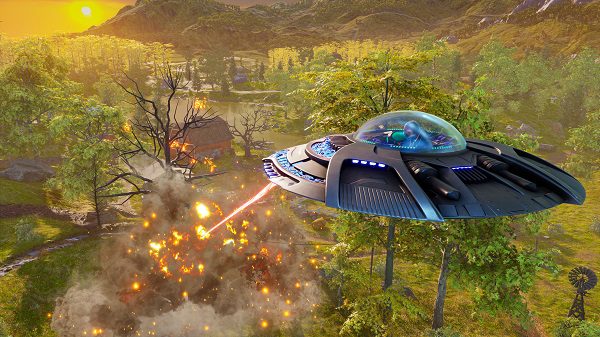 I’ve seen gameplay videos, read reviews, and listened to my friends rant about Destroy All Humans for years, but for reasons unknown I never bothered to figure out what all the fuss was about. Sure, I’ve had plenty of chances – Destroy All Humans was originally released on the PS2 and Xbox nearly 16 years ago, with a recent remake released on the PC, PS4, and Xbox One in 2020 – yet I still somehow never found time for the series. But once the Nintendo Switch port of the remake was revealed I decided it was finally time to shed my ignorance and dive into the silly world of homicidal aliens.

We all must admit that there’s some fun to be had in playing the bad guy, which is essentially the whole concept of Destroy All Humans. But I must say that, despite that, Destroy All Humans is not at all what I expected. All these years I’ve had it in my head that the game was centered around large levels featuring chaotic battles against humans where your only goal was to destroy as much as possible – but in reality the game is divided into bite sized missions featuring a variety of gameplay elements: defending important items against an onslaught, destroying a town, sneaking around military installations, reading minds to find out information, etc. This realization was a bit of a disappointment but makes sense from a gaming stand point as it allows for a more fleshed out story. The game does thankfully offer up areas for free for all fights after completing missions though, so I was only half wrong. 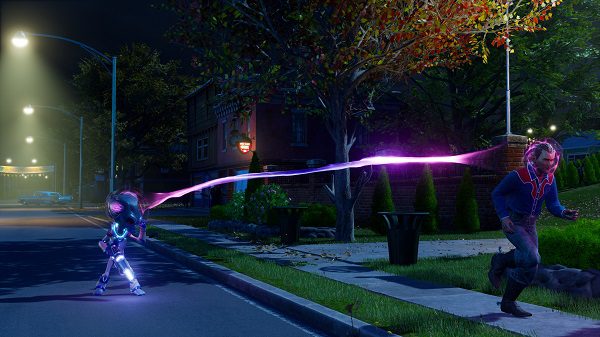 A lone alien ship visits Earth in search of DNA, but stumbles upon a rocket launch and the alien is subsequently killed. The alien’s remains are captured and investigated by the army, much to the chagrin of the alien rulers. The deceased was Crypto-136, sent to harvest  pure Furon DNA from Earth. Turns out, Furon DNA is imbedded in all human DNA due to a meet up between aliens and humans long ago. To remain immortal, the aliens must have access to pure Furon DNA, as their reserves were quickly degrading. Crypto-136’s death led to Pox, a scientist, and Crypto-137 to declare war on Earth. After he begins his invasion, Crypto quickly learns that he is not the only one with a sinister plot. Majestic, a shady government entity, and their agents were seemingly hard at work with a plan to use mind control on the citizens for their own nefarious means. Sensing an opportunity, Crypto decides to fight Majestic and find a way to use their mind control methods for his own mission.

The concept is simple but works. It gives all the expose necessary to provide Crypto with reasons to fight off both citizens and the military, while also giving him opponents a bit more technologically advanced with the Majestic agents, which have various means of preventing Crytpo from relying solely on his abilities to progress. 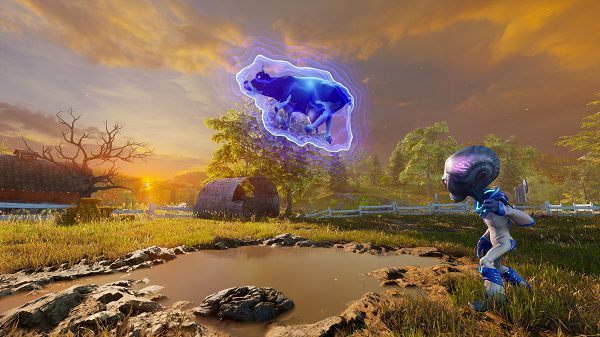 The main menu features mission select, archives, and Pox’s Laboratory. The mission select screen allows you to choose where to attack next or where to complete various challenges; the archives allow you to revisit tutorials, view sources and locations found during your invasion, change your outfit, and view a progress report of your invasion; while Pox’s laboratory allows you to trade harvested DNA for upgrades to your character and flying saucer. 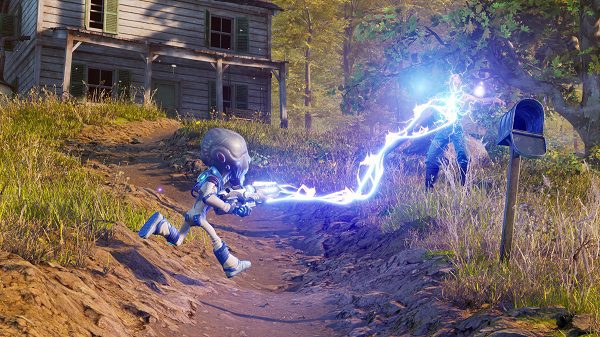 As for alien abilities, if seen by a human you can use an ability to make them forget about your presence or  you can use holoblast to manipulate a person into doing something that will distract others. The most important ability is the holobob, which allows you to assume a human’s identity, but must be recharged by using the cortex scan on humans or else it will stop working.  The holobob is necessary to disguise yourself and gain access to restricted areas

You don’t spend the entire game on land, and have multiple chances to hop into your saucer and cause damage on a large scale. While flying your saucer you can use your death ray and other weapons, which all have the power to destroy buildings. It is incredibly satisfying to level an entire town while taking down the increasing number of enemies attempting to stop your rein of terror. 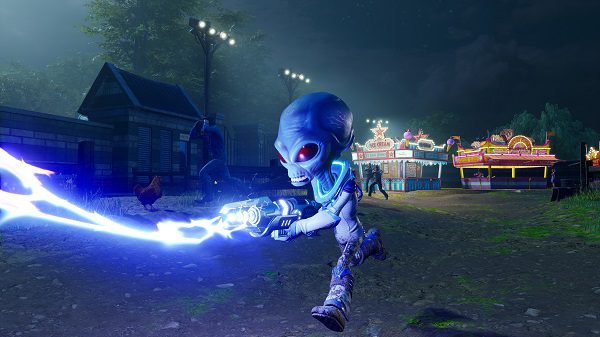 Crypto-137 has a shield which protects him from some damage and recharges after taking no damage for a set period of time, but collecting brain stems reduces the shield recharge delay. The flying saucer also has a shield, but it does not regenerate automatically – you must drain vehicles in order to recharge and each vehicle is only good for a small amount of energy, after which it will explode.

Levels are generally fun, if a bit repetitive. Most see you having to accomplish a few tasks and then get out, while either not being seen or causing as much destruction as possible – depending on the circumstances. While any time you are left to your own devices and allowed to wreak havoc the game is fun, it is the multiple stealth levels that weigh the game down and become a chore after a while. 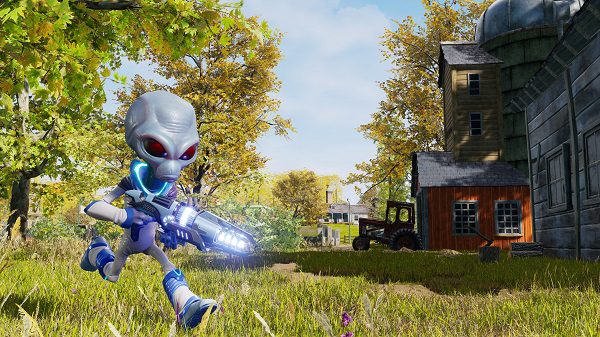 From a story standpoint I get the stealth levels, as they usually see you infiltrating restricted areas, gathering intelligence, and many times mind controlling a particular person – but in a game about annihilating the human race, you’d think the aliens would just run in, threaten everyone, get the info they want, then destroy the place. What’s worse is it is sometimes confusing as to what type of access you may need to complete the mission, being seen normally results in an automatic failure, and you may find yourself choosing the wrong disguises a few times before figuring out what the game wants. While these levels aren’t deal breakers, they do slow down the game a considerable amount, at least if you are not a fan of stealth missions in what is otherwise an action game.

Boss battles, though few and far between, are also quite frustrating as they do not allow you to have full access to your artillery and abilities, often making you either fight on land or from the saucer, which – if you’ve only bothered to upgrade one or the other, may lead to difficulty in progressing. Sure, you can back out of the mission, complete a few challenges and gather DNA to upgrade, but having to do that completely stops the main story line and makes the game lose a bit of momentum. I made it to the first part of the last boss before I had to go back and upgrade my saucer a few times to be able to get past a particularly frustrating section.  This involved me spending nearly an hour in a free for all area hoping that enough enemies would attack for me to collect the necessary DNA required for the upgrades that I needed.

Graphics unfortunately are muddy and sparse of details, feature quite a bit of pop up or textures which don’t load correctly or take a while to load. This also may be due to being played on the Nintendo Switch, as I cannot vouch for performance and graphics on other, more powerful consoles, but was still distracting. Not enough to ruin the experience, but enough that I’d expect some people may think twice about purchasing the Switch version.  Despite this the game is playable and I never experienced any slow down or bugs which prevented me from progressing, still – graphics can make or break a game and for a title being touted as a remake and being sold for $39.99, these graphics might be hard for people to swallow. I will say that the building explosions are impressive though, with buildings crumbling into thousands of pieces after catching fire.

While it may seem as if I have quite a few gripes about the gameplay, I want it to be known that I absolutely enjoyed my time with Destroy All Humans and, grievances aside, nothing that occurred was enough to make me contemplate quitting. I understand that this is a rather old game and forgive most of the issues solely due to that, as the concept and execution are normally more than enough to keep players entertained. The game has a ton of reasons to continue playing after completing the main story as you can continue completing abductions, rampages, races, etc and unlock more upgrades, but it will come down to individual players as to whether they have any interest in doing that when there is no more story to unlock.

In all, Destroy All Humans is an entertaining trip, featuring a story told through decently well acted and charming cut scenes featuring incredibly angry aliens hellbent on revenge and a variety of incompetent soldiers, citizens, FBI, and policemen with a smattering of potty humor for good measure. Hopping into a saucer and leveling an entire city block never got old, and chasing citizens around town as they yelled out a variety of humorous lines remained fun throughout. While there are definitely areas for improvement, for a game that is 16 years old, it is still well worth playing.

Special thanks to THQ Nordic for providing Fandomize with a review copy of Destroy All Humans for the Nintendo Switch.