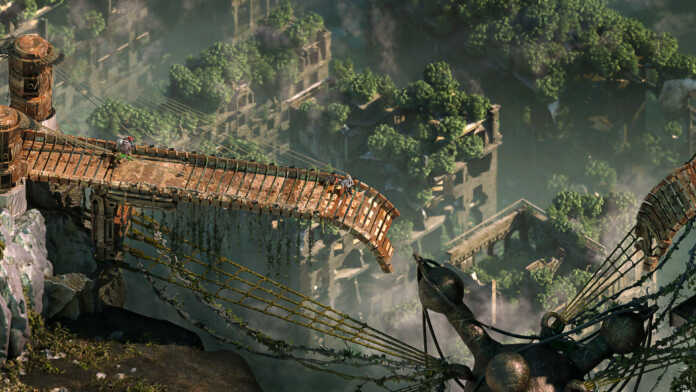 Beautiful Desolation was not at all what I was expecting. What, at first glance, looks like a top down RPG, turned out to be a thought-provoking look at life, family, love, friendship, and the thin line between right and wrong.

There are no leveling up mechanics, skills to master, weapons to gather, or combat to speak of – save for one optional arena, yet Beautiful Desolation still provides players with fleshed out characters that grow and change perspective based on the events they live through and creatures that they encounter. The world is brimming with interesting areas to explore, well-constructed characters, and morally ambiguous choices.

Charlize and Mark, a married couple living in Cape Town, South Africa in 1976, are on their way to pick up Don, Mark’s alcoholic brother, during a vicious storm. Suddenly a mysterious object appears in the night sky, causing a giant wave of energy which overturns their car, killing Charlize. Jump ahead ten years and Mark and Don’s relationship has never fully recovered, as Mark partially blames Charlize’s death on her brother’s alcoholism. The mysterious object which appeared in the sky on the night of Charlize’s death has now been named the Penrose, and with it came advanced technology which has pushed humanity to new lengths – helping to extend mortality and eradicate hunger and disease. Still, Mark is unsure of what the Penrose really is and believes that the government is hiding its true origins. 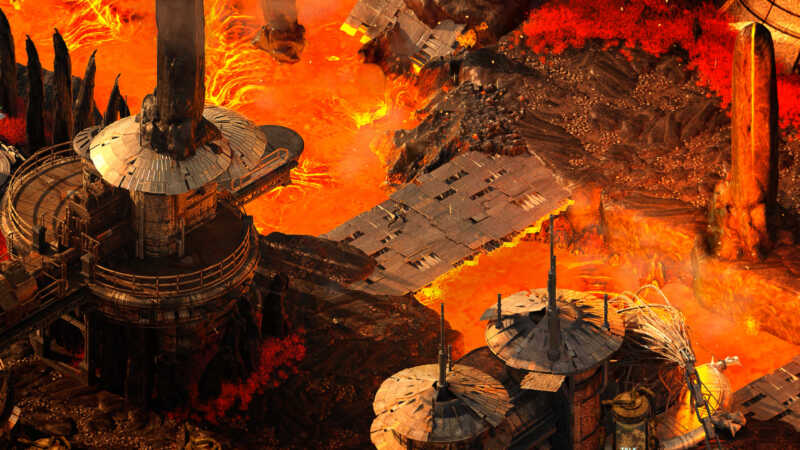 Mark seeks out Don’s help, as Don is now a helicopter tour guide specializing in providing tourists with a fly by of the Penrose. Reluctantly, Don agrees to sneak Mark onto the Penrose. Right after they land, there is a huge surge of energy, and the two wake up in a far different version of their surroundings. Years have past and humanity has been wiped out. The two are forced to work together alongside unexpected allies, including a robotic dog aptly named Pooch, to find their way back to their normal timeline.

To say more of the story would ruin the joy of Beautiful Desolation, as its sole focus is to tell the story of these two brothers and the various groups they encounter. You can play Mark as either a selfless man, or a selfish man, either demeaning or uplifting those he encounters. Nearly every choice you make throughout the 10 or so hour campaign will be morally ambiguous and will put you at odds with your crew and those around you. 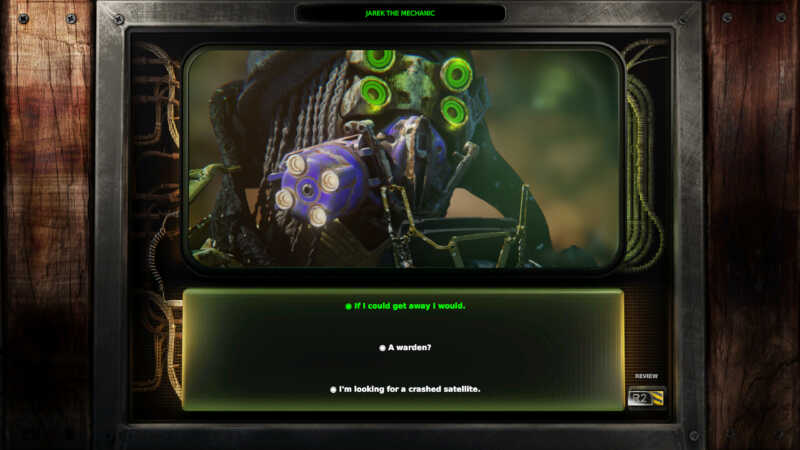 Like life, there is rarely an easy or even a right choice. Each choice you make will almost certainly upset someone else and, in some cases, lead to the destruction of a whole tribe or city. This makes choices carry weight, even if in the end eventually basically leads to the same outcome. Experiencing the story is the game, and despite gaining the same item despite your choice, the choices still have weight and still made me question if I had done the right thing. That is rare in video games.

The basic gameplay loop is fly to a point of interest, explore the area, speak with the locals, find new items, leave with your newfound information and head toward a new point of interest, then repeat. While this could sound stale on paper, it is anything but during gameplay. There is a wide variety of people to meet, help, or hurt, and items to find and unlock the use of. Many items may seem useless at first glance, but when combined with other items in your inventory – seriously, try to combine everything you find – they become useful to progressing the story.

Aside from the core story there are also several side missions which do little except increase your time in the dystopian world. Again, there is no leveling up or acquisition of new skills to speak of – so your actions are mainly to learn more about the world and those in it, rather than to increase some arbitrary character trait. It was refreshing to not have to worry about micromanagement of skills and abilities and instead enjoy the story. 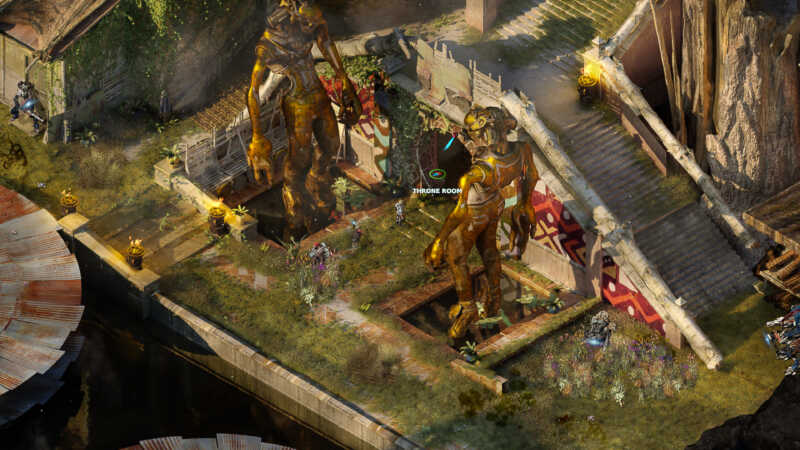 There is one task, albeit an optional one, where helping others can come in handy. If you complete the right quests then groups will provide you with a token, granting access to their warriors. This will become useful for a mission involving an arena fight against five priests. This is the only real area where there is combat, and it is turned based. The more tokens you have, the more warriors you are provided, and the better your chances at winning. Defeating the priests is necessary for an item needed to complete the game – but players have a choice to ignore this quest and gain the item through other means if wanted. I appreciate being given the choice and chose to complete both quests as I wanted to extend my time with the game.

If it seems that I am being somewhat vague about plot points, it is because that is the main draw to the game, and I want others to experience the story on their own just as I did.

There are a few gripes, mainly in the wonky controls and inability to pull the camera back far enough to see a larger portion of the map to figure out which way to travel. The controls I give a pass to because, from my understanding, this is a point and click game on the PC and that would work far better than using a controller. As it stands, the controller is fine, just a bit finnicky at times. Areas can be zoomed in or out on, but I would have liked to be able to zoom out fully on an area or be provided a map of the area to prevent some of the unnecessary travel that occurred due to not knowing I was heading toward a dead end. 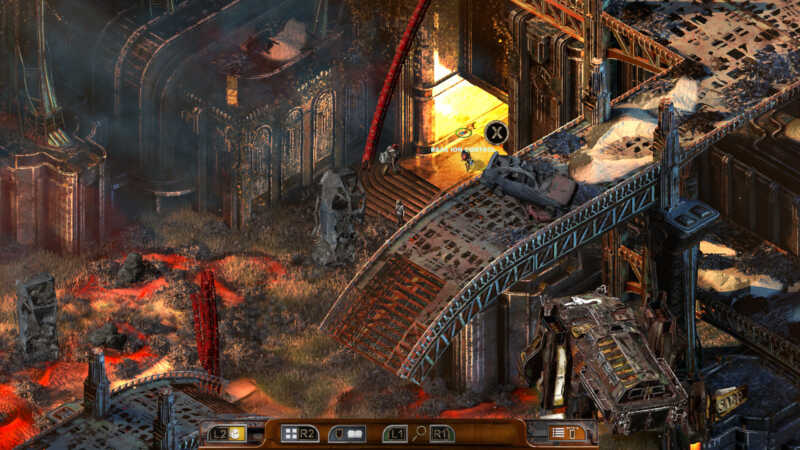 Be warned – some games handhold a bit too much, but Beautiful Desolation does the opposite. It nearly never tells you exactly what to do next. Instead it is up to players to explore, find points of interest, and use their notes and to-do list to discover their next destination. Unfortunately, there is quite a bit of backtracking, but the new information learned almost always made up for the grind that stems from the constant back and forth.

I greatly enjoyed my time with Beautiful Desolation, even going so far as to finish every quest I could find and creating multiple saves to experience the different outcomes from my choices. For players looking for an unexpectedly though-provoking story, take a chance on this exciting indie game.

Special thanks to Untold Tales for providing Fandomize with a PS4 review copy.