Tom Hughes takes on a huge challenge as he stars in the lonely ghost story, Shepherd, written and directed by Russell Owen.

Haunted by the recent death of his wife, widower Eric Black seeks solitude as a shepherd on a remote Scottish island. As the bleak desolation of the foreboding landscape and terrifying visions begin to overwhelm him, Eric is pushed to the brink of madness. Shepherd is a masterful, stylish, supernatural horror thriller starring Tom Hughes, Gaia Weiss, Kate Dickie, and Greta Scacci.

Check out my interview with Tom!

How did you come to be a part of the project?

Tom: I was on holiday actually, and my agent sent me the script. Russell had sent it to her with a little note. So, I read it. I read it on the beach. It was completely different from the stories of the world I was in and I was completely immersed in it. And living in Eric’s shoes for the hour and a half that I read it, I’d felt incredibly empathetically drawn to him. And I couldn’t kind of shake the residue of that for a few days. And I felt like it was really brave storytelling from Russell’s side. It felt like he very sensitively and quite delicately thought it through. For me, what felt very truthful was he’d woven the thread of what Eric is going through and also the tapestry of where Eric’s psyche is at that point, and that for me, I just thought, was brave in a sense, because we don’t always see it in cinema. We were just in there with him exploring everything he’s exploring, and then placing that in a sense of a genre film. So, I just thought it was really brave and really exciting.

So, when I got back from holiday, I told my agent, ‘I really want to do it.’ And when I met Russell, we had a chat, I thought he was great. He was quite open with me if I was suggesting there were elements of him in Eric. Eric and him are very different people, but there’s definitely a little element of Russell in him. I really felt like I could trust him to delve into telling the story and yeah, then I signed up. Three weeks later, I was on the Isle of Mull in the middle of wind and rain, freezing cold and going, ‘why did I do this film?’ No, I’m joking. I felt very, very lucky to play the part and I really wanted to be the person to bring Eric to life. 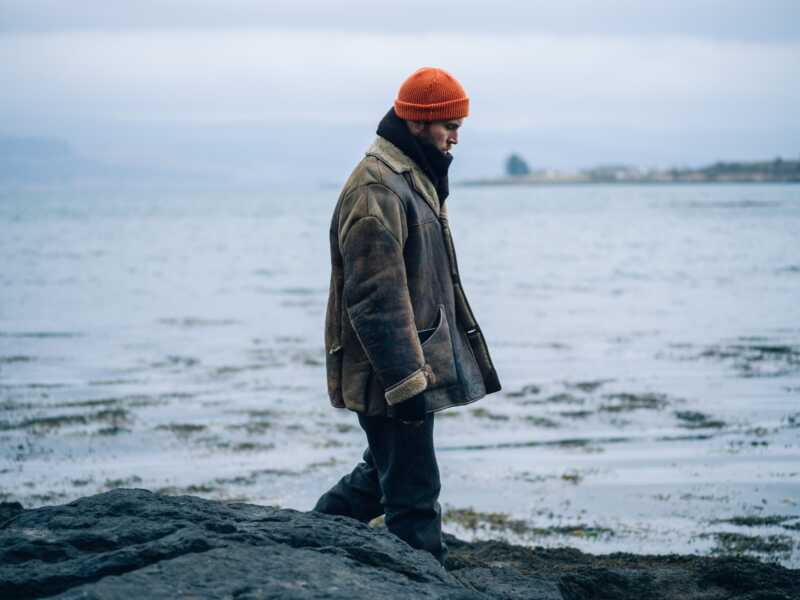 What was it like acting on your own for almost the whole film?

Tom: I don’t know. And that is such an odd thing to say. I’m surprised at myself that that’s just come out of the mouth, but it’s kind of true. I knew what I thought the challenge was going to be and I wanted the challenge, probably quite naively, you know, it’s a lot to take on and I don’t think I’m anywhere near the caliber of actor that should be taking those things on. But I was excited by it rather than intimidated by it. And I approached it like I would any other part, and just hoped that it would resonate, as in hoped that he would still be reachable. Because sometimes I think as an actor, not always, but if you’ve got great dialogue, you can kind of hide behind it at times. If you say it right, it does the work for you, sometimes. I had nowhere to hide in this so I thought the worst thing I could do is try and show anything. I just have to try and immerse myself in it and hope that it’s still reachable. And I watch it and go, ‘oh no,’ but yeah, it was a hell of a challenge. I’m delighted I took it on. I think I learned a lot about myself as an actor. But it was tough, yeah, of course it was, but you gotta put yourself out, sometimes.

Tom: Amazing. Shuggie is her name, the real dog… and it was like the second day of filming, something like that, with the shots of the van driving through the mountains, that was me driving because we didn’t have a lot of crew. Shuggie and I were in the van for about three hours and I just fell head over heels in love with her. So leaving her behind was incredibly hard, but I don’t think she cared, you know, I was kind of bereft and she just wandered off, not a care in the world. I loved her and also, she’s a scene stealer. She’s a better actor than I am for sure. It was quite incredible how good she was. She’d hit her mark, she’d know where to turn, she listened. It was like, ‘woah, you’re quite impressive.’ I loved her and if I could own her, I would. That’s the truth.

And how about the sheep? What was it like working with them?

Tom: Yeah, if I could own them, I wouldn’t. I wasn’t a fan of the sheep. No, they were cool and we needed them, but they didn’t listen to me at all. I mean, after the holiday, when I read the script, I had three weeks I think to prep. So, normally you’d go and immerse yourself in that and you’d learn how to do it and how to wrangle sheep or whatever the word would be. I didn’t. We had people who lived on the island who would, kind of last minute go, ‘you need to do this,’ which was amazing, but they [the sheep] knew I was a rookie. They didn’t pay attention to me at all. But then that kind of worked for Eric, he’s a rookie too. So it’s fine.

What’s something that you hope the audience takes away from watching the movie?

Tom: It’s a really good question and it’s a tricky one, isn’t it? It’s very much a character study, I think, but there’s genre elements. And I think Russell and the editor have done a great job of adding those kinds of shocks and thrills, the things that catch you unaware and grab your heart. And I think those things are always thrilling. The roller coaster element of that is a thrill for an audience, of course. But at the heart of it, for me, it’s a psychological thriller, and it’s a character study, actually, and it’s quite a specific character study in terms of it being Eric’s world. It’s very much about Eric’s character and confined to who he is. But me and Russell spoke as well about trying to make him, yes, he’s the man that has lived that specific life and that has shaped him but there also needs to be something about it that’s universal at times. And I know that when I read it, and I stepped into his shoes, like I said, the residue of that stayed with me and therefore by proxy, like any record you listen to, art gallery you go to, or film you watch, if you really go with that journey, you leave and for a couple of days, you look at your life from an angle that you may not have looked at before, even if it’s a little bit. And I definitely did that when I read it. So, I would hope that if we’ve made him reachable, if people can step into him and be with him and breathe with him, that hopefully they can come out and look at their lives a little bit like I did and just hold that residue and just go, ‘oh, okay, I’ve never looked at life from that angle,’ if we’ve got it right. And I hope that on some level we have.

Shepherd will be released in Theaters tomorrow and available On Demand and Digital on May 10th.