For the last couple of months, I have been in somewhat of a television funk. Nothing airing on broadcast, cable, or streaming has really tug at me with expectation. In fact, the last show I devoted myself to was CBS All Access’ Star Trek: Picard. In the months since I’ve indulged myself more in my ever-growing film collection (almost 1,200 discs) and Call Of Duty: Modern Warfare. However, on a boring Friday night stuck at home during the end of COVID Round One – c’mon, you know COVID Round Two’s peeping around the corner – my wife and I finally made ourselves comfy to watch Hulu’s Little Fires Everywhere.

Across two separate nights – two episodes late on Friday, the remaining six the next afternoon into late evening – we lost ourselves in this mini-series adaptation of Celeste Ng’s acclaimed 2017 novel. We shared drinks, wine for her and bourbon for me, as we gave the show our full attention. A Chinese feast of Dragon Phoenix – a spicy platter of General Tso’s and shrimp – along with house fried rice served as our binge-watch meal. What began as a watch-a-thon of a nail-biting and tense show turned into something much more. Beyond the drama, beyond the theatrics and the style and gusto acting was a very heavy tale at its core.

Little Fires Everywhere is a yarn of class, cultural, and sociopolitical differences among a regular American ‘burb, whilst integrating the want for identity and belonging. In the wake of George Floyd’s death, the significance of this melodrama’s nucleus is augmented tenfold. No one knew back when Ng’s book was published nor when Hulu released the limited series that social unrest and organized protest would arise the world over. Both Kerry Washington and Reese Witherspoon’s stirring portrayals are eye-opening and can change how we view our fellow neighbor. No matter color, creed, or sex. Our history is cemented but our past does not need to define us. We can always make a choice to reshape who we want to be.

The more I’ve read into bringing Little Fires Everywhere to the screen, the more I am fascinated. When Celeste Ng wrote the novel, she deliberately left Mia Warren’s race ambiguous. Ng felt she lacked the voice to write Mia as a black woman. When Kerry Washington (who also helped produce) met Ng, the novelist was excited to bring her biggest regret to life. After all, Shaker Heights is as cookie cutter as shown, a predominantly white town with a very low black populace. The hoity-toity host lavish social gatherings but generally cling around those with the same affluence. To make Mia Warren to be of black heritage was with merit, acting as a way to expose the underbelly of ethnic strain in everyday Americana. We may not grasp the weight of some words or phrases we utter, but the words cut deeper than we may imagine. However, without Kerry Washington in the lead, this show would have been incomparable.

Reese Witherspoon too. Witherspoon is so easy to hate from the start, with the simplest of snide remarks about race. The duality of both women is stark, one a loner bouncing from town to town keeping her face out of the newspapers whilst the other is an amalgam of tropes presented in Pleasantville and The Stepford Wives. From episode to episode, I couldn’t even peg the machinations of both women. Narrative aside, I found myself opening my eyes up a little more. I’ve no room to speak as a white male, none in the slightest. Little Fires Everywhere is an eye-opener about race in your average all-American town. Wealth and social standing carry much weight, from social groupings to book clubs, even to as low level as schooling. Beneath the facade of racial integration lies a bubbly boiling pot ready to spill over in an instant.

Little Fires Everywhere may throw the word “Emmy” into the open air, shouldn’t even be a question once you invest your time into this mini-series. (Now, if this show gets screwed over like Netflix’s When They See Us, I’ll flip my coffee table over.) If anything, I walked away with an air of introspection and self-reflection. The headlines of the last three weeks paint a portrait of an America that is no longer willing to bow its head in silence. The longer that we keep our mouths closed, the more tensions will rise. The show preaches that its cast of characters, as misguided and blinded as they are in their own ways, should not keep secrets anymore. To not remain silent, to sit idly by as what we oppose continues to worsen, no. Raising our voice may hurt and expose us, but if we don’t plant our feet firmly in the ground, can we really make a difference?

Behind every smile, every tear welling up at our tear ducts, every little breakdown itching at the back of our skulls is a choice. We’ve all had moments in our lives where we’ve come to the diverge of the trail in our life. Robert Frost wasn’t wrong in 1915, he’s not even wrong now in 2020. Me, you, our friends and family, strangers we pass in the street, all must make life choices. As straightforward or prohibitive as these decisions are, we must live with our decisions. An idea we follow. A tug at our heart strings. We either live with our choices, even if immeasurable regret. For Witherspoon’s Elena, the perfectionist who lives her life by what she calls “design” makes her bed in lies, narcissism, and anguish. By the time she stirs from her tunnel-vision, she’s left to stew in her druthers. Elena chose this life of hers, swaddled by white privilege and afforded by wealth. Those around her fell in line only to awaken with Mia’s arrival into their lives.

The show starts off by showing the matriarch’s house ablaze. Throughout the limited series, we slowly discover what led to that moment in time. You will feel seething anger about the racial divide, the difference between having money and coming from nothing, even the jealousy among your neighbors or family. Hell, I’m still appalled and taken aback. These realistic cast of characters spiral out of control in such a spectacular shit show that drives home the biggest point of all – sometimes, you need to burn this motherfucker down and build from the ground up. You know, if Washington’s Mia had never rolled into Shaker Heights, the slice of Americana would have always followed the plan of the town’s founders. Not everything should remain perfect. Your life should not be decided for you. You should be able to control what you want to be, what you desire to comply with, not needing to conform to norms governed by localities. Your life is your own and, sometimes, just the smallest of fires can alight an inferno to scorch everything to the ground to build anew.

I could sit here and spend hours breaking down how all of the little fires converge by the denouement. The offspring of both Mia and Elena, all whom play by the rules as guided by both mothers, find themselves tested and deviating from the paths they were set on. The subplots involving an immigrant’s daughter, Elena’s husband trying to toe the moral high ground for him and his children, Mia’s sordid past, everything eventually comes to a head. However, the main crux that serves as a parallel to today’s discourse is what really drives the point home. What we say in jest, how we view others not in our social standing or class, everything does matter. This world of ours is so beautiful, but we are surrounded by such ugliness. We take for granted what happens outside of our own four walls. Hell, some people don’t even have that luxury.

I’ve wrestled with my emotions since the beginning of the COVID-19 pandemic. I struggle more now with the protesting, the growing masses of people this country and planet over, no longer staying in their seats with closed lips. We are capable of better. We can be better. We can change, if we so desire and accepting to the idea. If anyone were to tell anyone back in 1967 that 2020 would upstage that riotous summer, they’d laugh at you. People need to huddle together and lose themselves in Little Fires Everywhere. This limited series exposes what lies behind every person, color and sex aside. My challenge to all would be, how can we overcome what’s written to create a new chapter? I leave you all with the last monologue from the show. Never has anything been so on the nose, so absolute, and so beautiful all at the same exact time. And so heartwrenching.

I thought I wanted to be made of fairy tale endings or I’d never even know what was real. They’re only a dream. So I dreamt that I belonged to you. Because I knew you’d keep me safe from big girl things. Giant spiders, natural disasters, and unnatural ones too. I’ve never felt as safe as I felt in that cage with you but, when I started to wake up, I saw those gilded bars around us and I couldn’t remember how it went in the dream. Was I the bird? Or was I the cage? Was I myself? Or one of my mothers? Was I safe? Or was I suffocating? Because the bird is in a cage. And the cage is in a town. And the town is made of blinding white flour and beautiful lies. And maybe we can’t help the things we dream of anymore than we can help the stuff we’re made of, or maybe we can. If we can finally see the lies and the town and the cage we’re inside of, we can see so many other things too. We can see the door. A way out. And we can fly away. 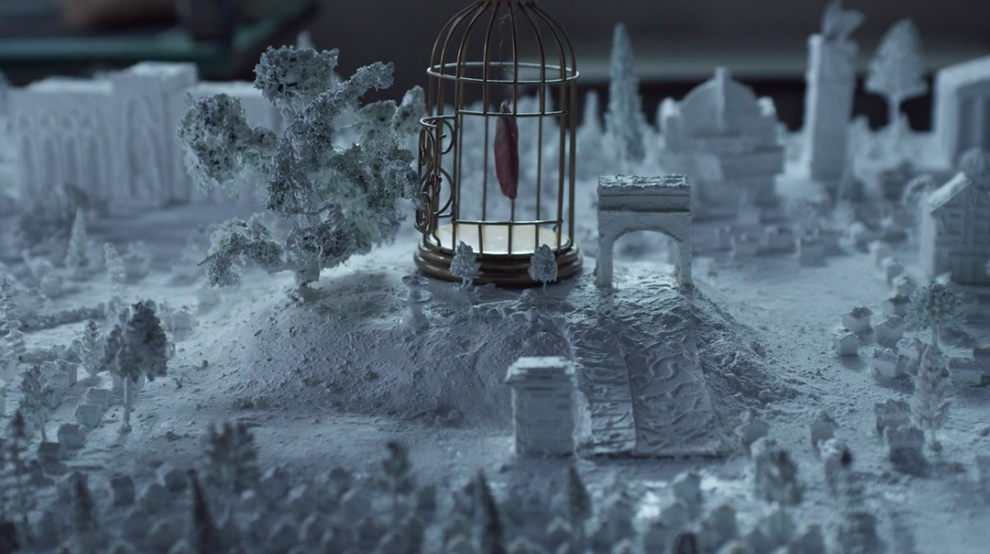