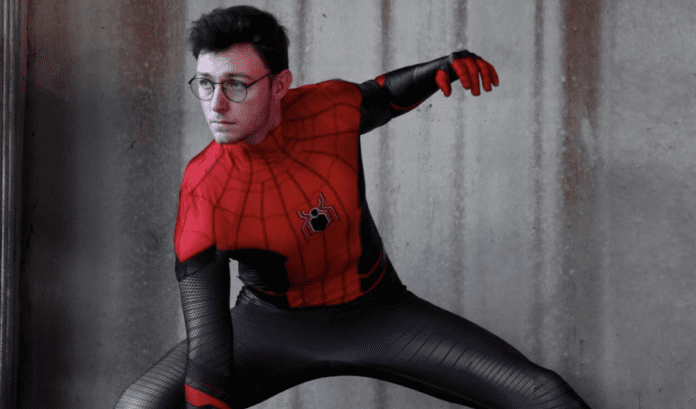 Content Creator and social media influencer Quinn Hardy has rapidly become well-known by his online persona Quinnickle. The spunky twenty-one year old from Orlando, Florida set his sights on the limelight decades ago, and has wanted to embody the people he’s seen on his screens for quite some time. From comedic sensation Bo Burnham to YouTube phenoms such as Markiplier, Jacksepticeye and MatPat, at an extremely young age he’s been enthralled by those who made content and aimed to make his own name for himself in this often saturated industry. If you’ve ever seen any of Quinnickle’s videos you’d quickly gather that Quinn exudes confidence, wit, and humor. His creativity is executed seamlessly online and as a result of his super captivating personality, he has amassed 3.7M followers across TikTok, and Instagram alone.

In an exclusive interview with Fandomize, Quinn says he’s always felt as if he was a creative person. “I enjoy making things, and the boom of Vine and TikTok allowed me the opportunity to make stuff alone in my room.” 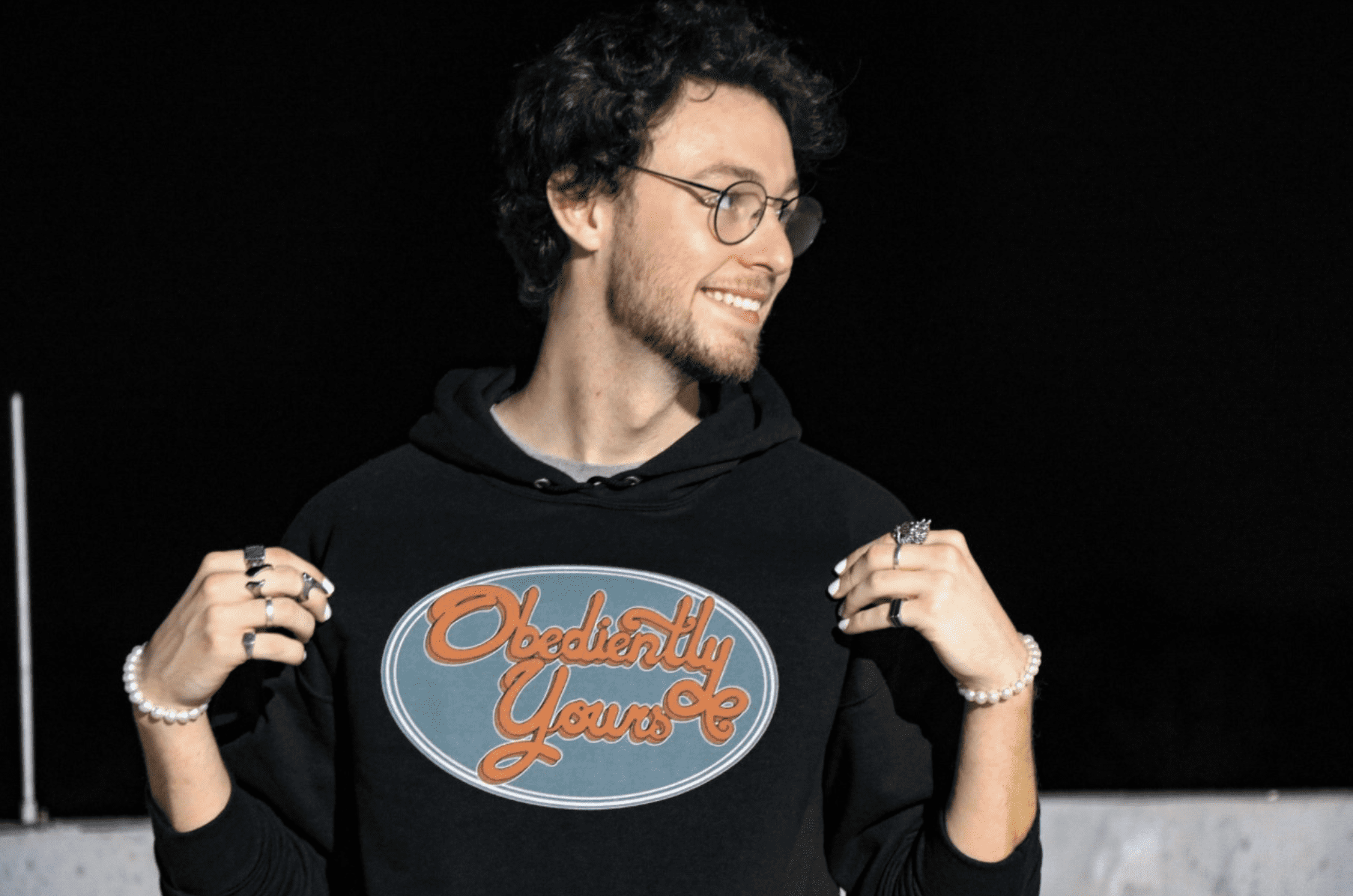 He goes on to tell us the story of how his tagline ‘obediently yours’ came to be. “The phrase ‘Obediently Yours’ stems from the Orson Welles Commentaries,” he says. “Mr. Welles would talk about social and political events in the world news. At the end of the commentaries, Mr. Welles would sign off with the phrase ‘I remain, Obediently Yours’ which stuck with me. I saw it as meaning you are unquestionably dedicated to those around you (and to yourself). As Mr. Welles says in one of his speeches, ‘I owe the very profit I make to the people I make it from’. I have value without my followers and fans which is something I think all creatives should have, but without them, I am not able to be where I am today, I can see my dreams come to fruition because of my hard work, and because of their willingness to stay with me and see what I do next. I am immensely grateful for them… and I am talking to each one of them when I say it. I am Obediently YOURS.”

I think it’s safe to say that his fans are obediently his as well. His videos generate thousands of comments and millions of views within mere hours of posting. And much like the majority of the world, Quinn spends a hefty amount of time on social media. He’s gotta keep up with his brand, afterall. “Social media was what I grew up with,” he said. “It is what keeps us all entertained whenever there is a lull in conversation, or we are sitting in the waiting room. I’ve slowly learned over time that it is a double-edged sword. It keeps us entertained whenever we need to be, but it creates unrealistic expectations for lifestyles, work ethics, and internal satisfaction.”

Internal satisfaction is a struggle many influencers, hell, many people face on a daily basis. Often times expectations do not always meet reality when developing a brand online, and sometimes we are left wanting. This was no exception for Quinn. When many other influencers within his interests and wheelhouse were getting invited to premieres and given these spectacular opportunities, he was sadly being overlooked, undoubtedly leaving him feeling defeated…  “I think I compare myself and my accolades to other creators too often,” he said. “I am very happy for everyone who gets opportunities. When people achieve their goals, you can’t help but root for them! But I was seeing people with equivalent followers and view counts doing so much more than me. I couldn’t help but ask myself ‘What are they doing that I am not?’”

Quinn goes on to say that the only piece of the puzzle that set him apart from the others was his lack of management. He describes his process of trying to get in with the ‘it’ crowd by spending countless nights scrolling through LinkedIn’s employee pages of movie companies and finding personal and professional emails requesting advice on how to get a ticket to movie premieres, and a seat at the metaphorical table.

“I would start at 8 p.m. and fall asleep at my computer at 4-5 a.m. I can confidently say I sent over 400 emails and have received 3 responses,” he explained of his efforts. “To pat my own back a little, I work damn hard when I have a goal, but the old saying rings true ‘it’s not what you know, it’s who you know’ and to put it plainly I didn’t know anybody. I’ve been networking and meeting more people, and I think that the movie premiere invite will come within the next year. When I get that ticket, that’s when I can happily say ‘I’ve made it’.” 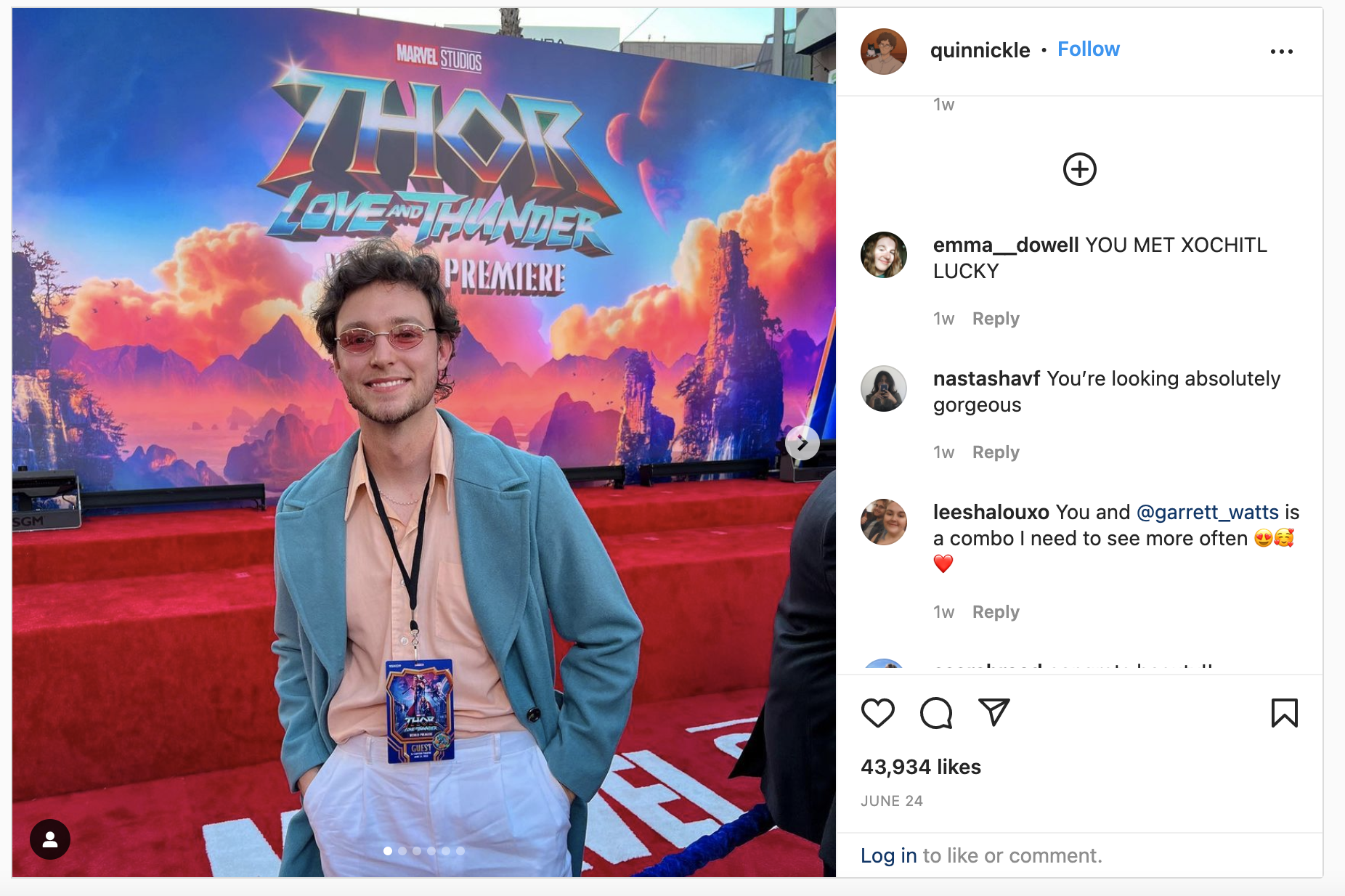 Since this interview was conducted, Quinn did get that coveted ticket… to the Thor: Love and Thunder movie premiere! Now that he’s officially made it– will he forget everyone that has propped him up throughout the years? Heck no! I mean, sure, Quinnickle has millions of devoted fans… but who in his personal life is his biggest supporter? “Easily my mom,” he said without hesitation.

“My mom is always complimenting me on my newest videos. She always wants to give me new ideas or hear what ideas I have in mind for upcoming videos. My mom has always been like that. She’s the kind of mom you can talk to without feeling like you need to dance around any topics or hold back any feelings. She’s so positive and helpful for me and my siblings. If I’m ever feeling down or burnt out, I know a call to her will reinvigorate that drive and energy that I have. Love you momma!”

In addition to his mother, Quinn gave honorable mentions to Farwah, Mansi, Beeb, Melanie, Hayley, Fani, Bri, Hannah, and Gabo. “They are my moderators across every platform and take time out of their schedules to help me out whenever I need it,” he said. “They’re such good friends and I wouldn’t trade them for anything. I’m immensely grateful for them and don’t show NEARLY enough appreciation.”

Quinn’s content is well-rounded, robust, and captivating– but what is his favorite type of video to make and send into the interworld? “Honestly it depends on my mood!” he said, “I really enjoy making my cooking videos because I get to reap the benefits afterward haha. I love cosplay videos, too. Nothing beats a good transition into a Spider-Man costume!”

If his shiny golden ticket to a movie premiere wasn’t “making it” worthy, how about his super exciting role in the upcoming Teen Wolf movie! Yes, you read that right… TEEN WOLF! Quinn’s middle school self leapt at the chance to star alongside some of the OG’s from MTV’s hit teen drama.

“It was one of the best experiences of my life!” he boasts. “I’ve been watching Teen Wolf since I was in middle school and actually ran a fan account for the show on Instagram with over 10k followers from like 2012-2014/2015. Being able to wear a Beacon Hills jersey and meet the actors I had obsessed about for years was something I can’t put into words. To be completely honest, I cried a little after putting on the jersey. I had become a part of the universe that was so vital to my childhood and teenage years.”

To add to the excitement surrounding the role and it being the acting experience of a lifetime, Quinn was able to take photos and chat with Teen Wolf royalty such as Tyler Posey, Colton Haynes, and Jeff Davis, which he explained ‘made it even more special.’

Hollywood aside, who in the vast TikTok sea of creators is his dream collab? “Noah Beck,” he said. “I know that seems kind of out of left field for the content that I create, but he seems like a person who knows what they enjoy in life and is seeing the fruits of his labor. He loves soccer, so he’s doing big things with the MLS. He enjoys fashion, he’s now making GRWM videos and has worked with other big creators like WISDM and Elsa Majimbo for the Coach campaign. It seems like anything that he enjoys, he does it. I have to respect that.”

But what would a Quinnickle x Noah Beck video look like? “The video I would make with Noah Beck is probably him teaching me how to play soccer,” he said. “I’m good at most sports. Football, volleyball, basketball, baseball, you name it and I’m probably decent. Soccer, however, I am not good at. I don’t have good enough foot coordination for that.”

Hear that Noah? You have a soccer sensation to cultivate!

Although Quinn is mostly private, and wouldn’t divulge any scintillating information to Fandomize, boooooo, he did however let us know that he doesn’t like guacamole and alarmingly states that he thinks everyone who says they like it is lying! “There is no way you enjoy it guys,” he said. “We can all stop pretending now!” 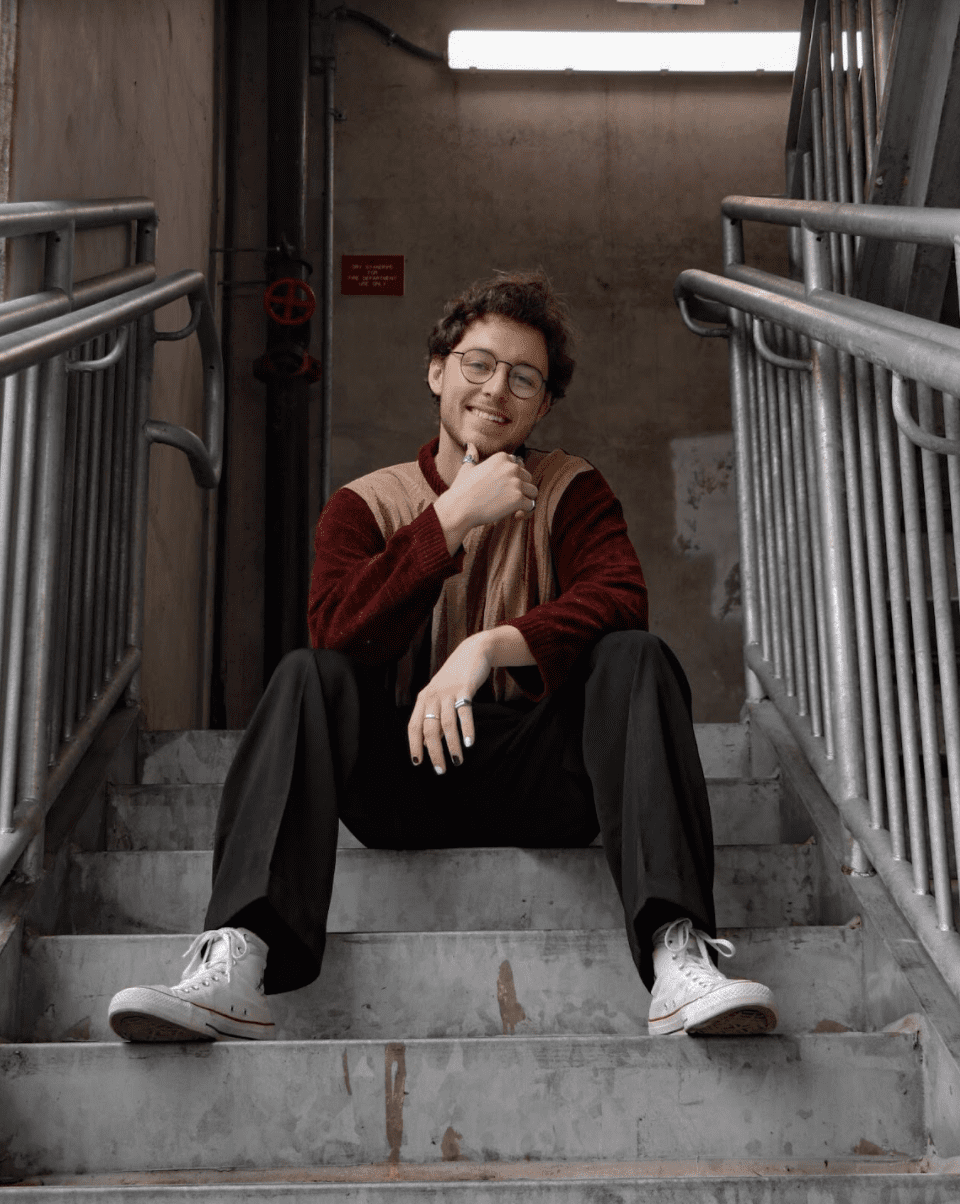 In order to redeem himself from his unforgivable hate comment against guacamole, we need to try and balance the interview with our signature question… When asked what type of donut he’d be based on his personality in real life, Quinn said this…

“I would say a classic strawberry donut with sprinkles (my favorite kind of donut).” He added “it’s not something over-the-top or trying to be more than it is. It’s a reliable donut. It has something for everyone. Need a little bit of sugar? It’s got icing, but not too much. Want some pizzazz? Multi-colored sprinkles! It’s a people’s donut… and it is Obediently Yours!”

Of Quinnickle’s future on social media, Quinn states that “TikTok sees quick rises and falls, I want to make sure I’m not someone who comes and goes with the wind.” To keep from fading away, Quinn has a plan! A five-year plan, believe it or not– that doesn’t revolve around TikTok. Although grateful for the opportunities TikTok has afforded him these last few years, he would like to build his career on other platforms such as Instagram and Twitch. “I want to get into acting, improv, writing, and more,” he said. “Any genre of entertainment, I want to be there. In terms of my life, I want to make sure I’m eating right, working out, and staying mentally healthy… the basics!”

Whatever avenue Quinn chooses to bestow his brilliant mind onto next, we’ll be watching from afar… obediently his fans for life!

Catch up with Quinn on Social Media: TikTok | Instagram | Twitch

Gabriela Milla on returning to acting in Acapulco

Gabriela Milla on returning to acting in Acapulco

Check Out These Queer Superheroes