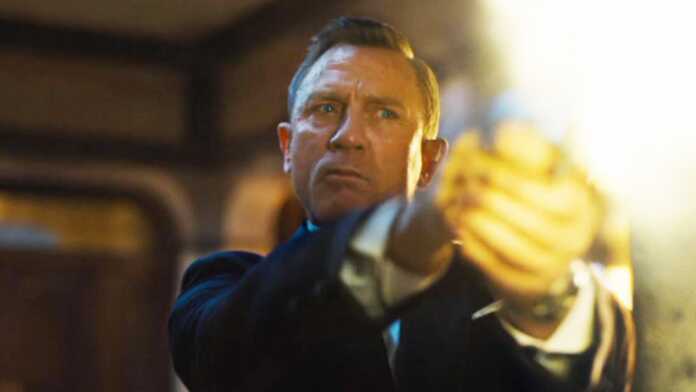 From the beginning, Hans Zimmer’s bombastic overture overlaying Craig’s final strut through the iconic gun barrel, to the very end, sitting there muted and openly stirred during the credit crawl, I felt a bevy sorts of emotions about Daniel Craig’s swan song. For the first time in franchise history, we finally have five films that boast a running continuity instead of being one-off’s in a series of adventures, a character that’s as much a staple as Sherlock Holmes. Each movie is just another chapter from start to finish, one complete story. But this time, these films serve as a long chapter, from Bond’s rookie days as a Double-Oh through the latter part of his career, happily retired and living life off the coast of Jamaica, funny enough at Ian Fleming’s Goldeneye retreat on the northern coast of the island.

How fitting that James Bond in No Time To Die, an elder statesmen who’s saved the world countless times he’s lost count of who the heroes and villains are anymore, winds up at Goldeneye. Daniel Craig’s contributions to the franchise are exactly how the actor how Ian Fleming envisioned the character. Cold and ruthless, but dedicated. A sense of swagger and dry sarcasm about his wit. Sworn to the job and his country, but looking for more in life. A blunt instrument looking to finally settle down and hang up his cap.

Despite some reservations, No Time To Die is absolutely worth the long wait and can only be seen in the biggest theater you can find. The acting, the action, the chase sequences, the cinematography, the set designs, Hans Zimmer’s score, everything putting this flick together is just unconditionally beautiful. Hell, even Billie Eilish’s theme song, with strong lyrics but her dull auto-tuned voice, drives home the film’s point. No Time To Die is an emotional rollercoaster of heart-pounding suspense, unrequited love, high stakes, and layered character. This is the book-end to a long-running chapter of a man who’s been through the ringer, his heart broken and trust thrown into the wind, trying to find his own little corner of the world to retire to. The world evolves, as does Bond, and he’s aware that the world of spies will never change. Heroes and villains rise and fall, but when does a man know when to stop risking his life to settle down?

Is this Craig’s best performance of his tenure? Absolutely yes. Hell, and then some. Throughout his stay as James Bond, we’ve seen his Bond grow and mature. That’s the first we’ve seen since the early days of the franchise, Sean Connery still a fresh face and Bond not a worldwide juggernaut in theaters yet. Craig’s so much at ease, being given playful and serious dialogue thanks in part to Phoebe Bridge-Waller. Craig’s engaged, one minute musing over bottles of Heineken with Felix Leiter with a light and airy demeanor, later on trading emotional soliloquy with former flame Madeleine Swann about life and love and the unknown future. A shame that we couldn’t get a couple more films under his belt, but Craig saved his very best for last in a performance that is riveting till the very end, a BAFTA Award hopefully in his future.

But No Time To Die will not be remembered as Craig’s best Bond movie. That’s still Casino Royale. Far and away. Craig’s Bond is still very raw and unsure of himself, very emotionally fractured and flawed and navigating the waters of the international scene. The action was frenetic and high-tension, and Bond’s relationship with Vesper Lynd was some of the best we’ve seen in the franchise, rivaled only by Diana Rigg’s Tracy di Vicenzo. Sure, the Texas hold’em poker game that Bond finds himself playing hasn’t aged all that well. Overall, Casino Royale was tighter in plot and pace and buzzed by in a dreamy high-suspense haze that left audiences wowed and breathless.

No Time To Die isn’t even near the franchise’s best. On Her Majesty’s Secret Service is still my absolute favorite at day’s end. Yet, Craig’s grand finale serves as a spiritual companion to the 1969 entry, Louis Armstrong’s jazzy “We Have All The Time In The World” popping up frequently one way or another. The theme’s either a musical cue that tugs at your heart or in various spiels by Bond, slyly winking at the spy’s unspoken past between Quantum Of Solace and Skyfall. In time, there’s possibility that this can stand toe-to-toe with the likes of the best, but there’s a lot that needs to be absorbed first.

Moneypenny’s given a little bit to do, Tanner even less, but the cocky Q is awarded the most to do of the three. Gareth Mallory is given a meatier role, his version of M coming across more ornery and much of a slithery do-gooder, a different layer of the long-running boss, but for good reason more than anything. Ana de Armas and Lashana Lynch both steal the film when they’re on screen, though de Armas is in a far too-short Cuban sequence that paves the way for her possible return down the line. And Lynch is the perfect partner foil for Bond, both disagreeing on each other’s repertoire and constantly jabbing at each other with witty sharp barbs. (Give Lynch her own series, bring back that supporting cast for her too. Please.)

Waller-Bridge’s dialogue polish has far more punch than the overall plot though, and that’s painfully obvious by the middle of the film. The characters may make the film, but the overall plot is a bit weak and reminiscent of Mission: Impossible II. And that sequel is absolutely forgettable. Rami Malek can be a polarizing actor in his own right. Great in one breath, but dismal in the very next. I can’t fathom why one man would want to take his vendetta against two men (Blofeld and Mister White), but amplify that taste of vendetta onto the whole world. The Macguffin is a bit more science fiction, yet grounded in the modern day, still hokey. Safin’s henchman is more a thorn in Bond’s side than the villain, Malek’s soft-spoken baddie more preachy than dangerous. I in no way felt the world was ever on the brink.

But I sobbed on and off for much of the final 15 minutes. That says something. Hans Zimmer’s crescendo to the Daniel Craig era is hauntingly beautiful and drives home the very sense that Bond keeps on fighting and moving forward with every inch and fiber of his very being. That’s the spirit of Fleming’s character alright. I was at a loss for words. But then, there were the famous words I awaiting to read –  “James Bond Will Return.” Whoever is after Daniel Craig best bring a new layer to the character. These are big shoes to fill for whoever takes the creative helm next. And for the actor who must carry the torch.

No Time To Die has its share of flaws, but the finale is certainly open for interpretation. I can’t help but feel disappointed and slightly underwhelmed. Trying to cram so much detail into this hampers what could have been something of perfection. I don’t blame Fukanaga – after the frustrating narrative of Spectre, how can one course correct? But I need to see this again. Craig’s long walk into the sunset was something amazing and had no business being anywhere but in a theater. This fan cannot wait to see just exactly what Eon Productions has in store next and has much faith in where Bond will go next.