Kate Brewer explores the truth about forced and child marriage in the U.S. through the complicated experiences of those who have survived it in her documentary Knots: A Forced Marriage Story.

Three brave forced marriage survivors – Nina, Sara, and Fraidy – take us on a revealing journey through their lives and fight alongside advocates, experts, and law- makers to end this gender-violence issue in the U.S. With the help of dynamic visuals – including original illustrations and a specially choreographed movement piece – this film brings to light both the horror and the hope that define this difficult issue.

How exciting is it to complete a project of this caliber?

Kate: It’s really exciting, especially after all the ups and downs of what it took to get to the finish line. And I, in that respect, I just owe so much to my incredible crew and everyone who was involved in this project because without them, honestly, I don’t know how we would have managed to finish. But yeah, it’s really exciting to finally be at this point where we’re able to share this story and share what we’ve learned about this issue with the world.

What were some of those ups and downs?

Kate: Well, it being my first feature film ever, and first feature documentary, I don’t really think I knew entirely what I was getting into. And I’m really glad that I didn’t because I think if I had known all of the challenges that we would have faced, it would have been, you know, more difficult to take that dive in the first place. But I mean, I had a lot of the same challenges that a lot of indie filmmakers face with getting grants, getting funding, and people taking me seriously. And I think one of the most important things early on in the process with this particular documentary was we really, really wanted to make sure that the subjects, the survivors, understood who we were, where we were coming from, our goals with this, and, you know, to build a relationship and build that trust and to make sure that especially given the experiences that they’ve had with forced in child marriage that they had a sense of agency throughout the process. That was something that we were really focused on throughout.

Was it difficult to find women to talk about their experiences.

Kate: It was a little bit challenging. Fraidy, Nina and Sara who are in the film, had already been doing a certain amount of public outreach and sharing their stories but, you know, talking to someone for a short news clip versus going in depth for a full feature documentary are, you know, on sort of different levels of excavation. We actually talked to a number of survivors before we decided on following Nina, Sara and Fraidy because we wanted to make sure that the survivors were in a place where they were comfortable speaking out and in a safe place, like it wouldn’t negatively impact their livelihood and their safety.

What inspired you to tell these stories?

Kate: My background is primarily in filmmaking and screenwriting but when I was freelancing, I had started to do more advocacy work and I was really passionate about trying to find ways to use my storytelling skills toward helping issues that are really cared about. So, I ended up getting positioned at a nonprofit that dealt with all sorts of gender violence issues and forced child marriage in the US was one of those issues. Before I started working there, I had no idea that this was happening in the US, not just that it is happening, but that it is so widespread and it affects so many different women and girls from all different backgrounds. The more I learned about the issue and how complicated and nuanced it is and how it doesn’t look like what most people think it looks like, that it’s a lot of the time does not look like a gun to the head… I wanted to find a way to create a platform for survivor’s voices so that people would have a better understanding of what this looks like.

Why was this a good time for you to tell these stories?

Kate: That’s a really interesting question. I think they were the kind of stories that I hadn’t really heard a lot before. And I think when you get into stories that have a lot of complexity and have a lot of nuance, you know, and this applies to a whole host of issues, I think I was just really drawn to these women who were struggling to be believed, who were struggling to be heard. And not dismissed by society saying, ‘well, because the word marriage is attached, was it really that bad’ or, ‘I’m sure it wasn’t too bad’ or ‘this is something that happens in our culture and society.’ When the word marriage is introduced, in a way, that ends up sanitizing these abuses and I found that really horrifying and interesting. I think that’s part of what I was drawn to is just also that idea that these survivors, they struggled to speak up a lot of times because people tend to write off the severity of what they experienced.

Did you have any idea of that severity going into this project?

Kate: I have learned a tremendous amount from just listening to survivor stories, not even just the survivors who are featured in the documentary, but sometimes other survivors of forced marriage will reach out to me and share that, ‘hey, this is something that happens to me as well.’ And so, yeah, I continue to learn constantly. It’s something that I probably knew a fraction of going into this documentary and I’m still learning about it every day. 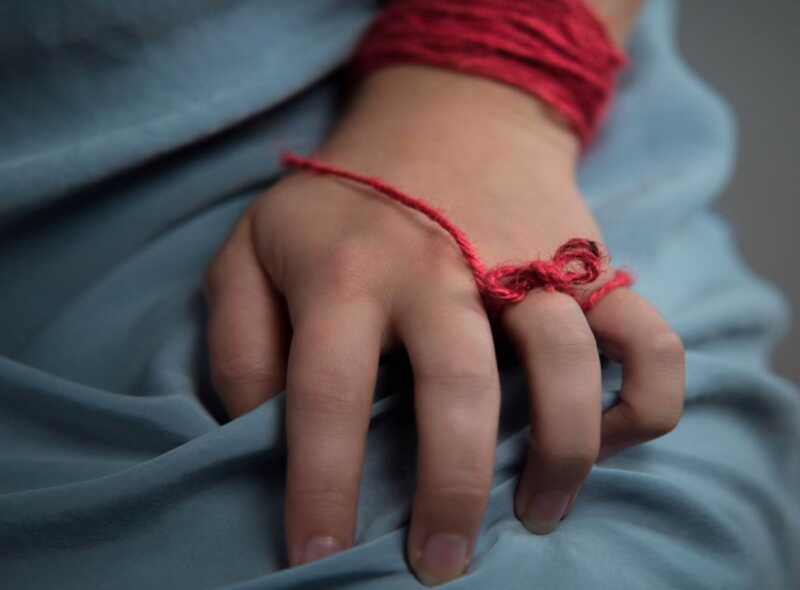 Was it intentional to be more emotionally driven than to give specific details of their experiences? It’s interesting because names and religion are left out.

Kate: Yeah, absolutely. That was really intentional. We struggled a lot in the beginning with figuring out how to focus this because there are so many different avenues of this issue and of each of these women’s stories to explore. I mean, you could do a whole new series on each and every survivor on all the different aspects that are included in this issue, the domestic violence, the religious abuse, the sexual abuse, there’s so many different aspects, but we really wanted to concentrate on really presenting their stories as people. We wanted to keep a very human focused lens, where we are aware that there are these other issues that are affecting how we address this problem and how this problem is perpetuated in the United States, but we wanted to make sure that was a platform for survivor voices to share what they felt comfortable sharing in a way that would help people come to a deeper emotional understanding… In terms of leaving the spouse’s husband’s names out, that was also very much intentional. We wanted to keep the focus on the survivors and sort of understanding that there were probably a lot of questions coming out of the film, but I don’t necessarily think that’s a bad thing. It may prompt people to do some more digging, to do some more research and I think anything that encourages that, I feel good about.

Another thing that I really enjoyed were the visuals and the imagery, especially with the yarn and the dancer. How did that idea come about?

Kate: So, the idea of the yarn first came up with my brilliant graphic designer Chris Cook. She’s the graphic designer, the production designer, the art director, she’s just super talented and so she came up with this idea of the red thread as like a thread that connects people in their lives and their destinies, which I think is a Japanese philosophy that she found while doing her research. But then we started to look into the idea of representing this abuse and these systems of entrapment that can overwhelm a woman or girl in a situation before they even realize it. It started actually with us thinking about using the red string in sort of domestic settings and as we had a lot of discussions about how we were going to approach, representing the emotion of certain scenes visually, without being exploitive, without being sensational, which is something we were really trying to avoid, that’s how the idea of the dancer came in. Bella (Waru) is an incredible performer. They and watched, with the survivors permission, watched the entire unedited interviews with each of the survivors, which I think we’re close to if not more than eight hours each. And then they worked on developing the movement to reflect, sort of an overall emotional arc.

For those of us who don’t know someone who’s in this position, what are some ways that we could also help out with this?

Kate: There are a number of ways to get involved, but one of the easiest is just first to look at what’s happening in your particular state. Reach out to your local representatives. What I’m finding more and more is that there’s more local as well as a couple national organizations that are starting to focus on this issue and legislation is being introduced in a number of different states. So find ways to support legislation that aims to end the loopholes that allow for child marriage because marriage is one of the most heinous and prevalent abuses and children are so incredibly vulnerable. So, yeah, I’d say, find out what’s happening in your state, reach out to local organizations that are working on this issue or if they’re not, you know, we can bring to their attention. And yeah, try to work with state representatives to look at either introducing or supporting bills that are closing these loopholes, and I think overall, even just having conversations about it. But I found that whenever I’m talking to someone and I use the words ‘forced marriage,’ a lot of people don’t really know what that looks like. When I was describing the scenario, almost inevitably, someone would go, ‘Oh, that sounds like my aunt,’ or, ‘oh, that happened to a friend of mine,’ or ‘that happened to a girl I used to live next door to.’’ It’s a lot more prevalent than people realize and we don’t necessarily know what to look for. Even having conversations and being aware of what to look for, I think is a really good start.

As you continue on in your career, are you going to continue to do projects like this?

Kate: I honestly just kind of narrowed it down for myself recently. I think I could make a career focusing on a combination of documentaries that really shed light on issues that I care about and horror movies from the female gaze.

Is there anything else that you’d like to add about the documentary?

Knots: A Forced Marriage Story is now playing in theaters.

McKenzie Morrell - September 24, 2020 0
With only one episode left (EVER) of The 100, it's only natural to feel all sorts of emotions as we rapidly approach the end....

Why Casting Andrew McCarthy on ‘Good Girls’ Is A Killer Move

Five Reasons Why ‘Schitt’s Creek’ Is the Sh*t!