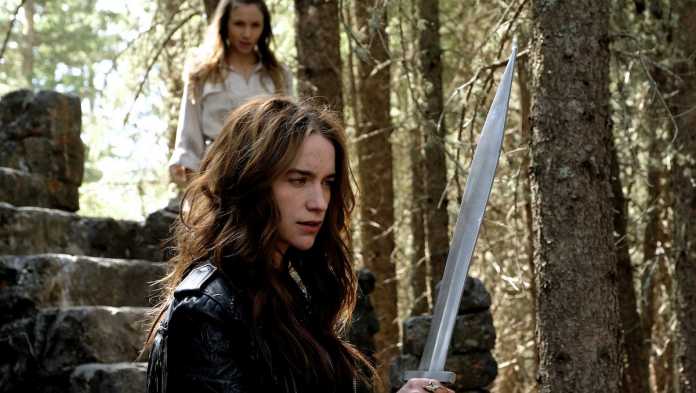 Season 4 of Wynonna Earp is finally happening this Summer! Grab your guns and let’s head for the Garden, we’ve got some people to save. Despite Melanie Scrofano and co. hopping back into the saddles to shoot the highly anticipated fourth season, we haven’t forgotten what it’s taken to get here. Countless billboards in Times Square, Social Media frenzy, endless support from Earp-enthusiasts across the globe, and of course SYFY, who swooped in with their neon yellow armor to make continuing this story a reality.

A lot has happened since Season 3, and fans are eager to see how this all plays out. No more peacemaker. No more curse. Will Wynonna rescue her little sis and partner in crime Doc from the unknown of the Garden… will Nedley and Wynonna be a good team? Are there any dad’s left for Wynonna to sleep with? Which way is up, which is down, and in the words of Dawn Summers “where do we go from here?”

Despite the uncertainty the cast has faced over the last year or so, Melanie Scrofano hasn’t skipped a beat, and told us back in Fall at New York Comic Con that she’s back to fighting all the bad things on the SYFY series, and man are we stoked.

Here’s what the charming and quirky Scrofano had to say during our conversation in New York City.

MCKENZIE MORRELL: In your own words, where do we leave Wynonna is Season 3 and where do you hope she picks up in Season 4?

MELANIE SCROFANO: You leave Wynonna in the shit in season 3, and you hope she winds up out of the toilet in Season 4. You leave Wyonna alone with Nedley, not ideal. Like pick a sexier duo. I hope in Season 4, I’d love to see Wynonna and Nedley just like bond a little bit more over how weird and different they are while they’re hunting for the two in the garden.

MM: They really are complete opposites, the two most random characters fighting the good fight. Earpers are described as some of the most kind and community-oriented people. When you realized they were behind billboards in Times Square, really trying to save the show, how did that make you feel and just describe that experience.

MS: In a way it wasn’t surprising that they would fight for us because they have such good hearts and they just want so much for us as people, not just as a show. They care about us as people. So I wasn’t surprised, but the creativity in the way that they did, and the effectiveness of it just inspired me to want to fight in my own life that way. A lot of times where I would just want to give up, what’s a different way to fight for this that might not work, but you could try, you know. Because they did it, and it worked.

MM: They did! It was amazing watching that unfold. Probably one of the best fandoms I know. SYFY Wire was saying that the Earpers are the loveliest people in the world. It was really nice to watch that unravel.

MM: Using 3 emojis, how would your cast-mates describe your character?

MS: The shit emoji, the eggplant emoji and the peach emoji.

MM: Hard hitting questions that we all need to ask…

MM: Fun little interjections are always fun. This is life, and this is how it happens. Obviously there was a time where we didn’t know if you would get another season, what was that first reaction that you had seeing that SYFY was behind you, that the fans rallied together and you guys got the funding.

MS: That it came through?

MM: It was definitely touch and go there for a while.

MS: Honestly, the reaction was that you can do a lot with the right people in your corner, and just the power of people believing in something and coming together to fight for it. I really can’t stress enough about just taking a chance on something that you believe in because you never know what will happen.

MM: That definitely changes the game.

MS: Waking up without any weapon sucked. There was a lot that happened but those were the main two.

MM: How about the elephant in the room… Wynonna slept with Waverly’s father.

MS: Oooohhhh! That is another one to the previous question.

MM: What are your thoughts on that revelation and is it time to call the Jerry Springer Show?

MM: Can’t get any more f’d up than that, right?

MM: But how do you think Waverly feels? How would you feel if someone you thought was your sister slept with your dad? [laughs]

MS: Listen, but here’s the thing. Her dad is hot.

MS: Nobody knows so it’s all…

MM: And obviously Waverly is a very important person in Wynonna’s life, to what extent do you think Wynonna will go in order to rescue her.

MM: To kind of have a terrible segue…

MS: hmmm… what kind of sandwich would you be?

MM: Yes! But no. Have you infused any of Wynonna into your character in Ready or Not?

MM: She’s a little messed up. Can you talk a bit about that role and your experience on the show. She’s a fun little alternative to Wynonna.

MS: It’s funny how much people thought how different they were. I always thought her and Wynonna were very similar in a way, like here’s a gun go use it. Wynonna did the same, she couldn’t use it at first. Who knows, maybe with time Emily can be the next Wynonna. Or not. Because spoiler.

MM: Spoiler alert. Emily [Andras] is going to come after us all. Alright, so something is dragging you into the Garden of Eden, what weapon are you reaching for to save yourself and you can’t choose peacemaker or a sword, go.

MM: Pummel the vines. I’ll take it! If you were given a chance to cosplay at New York Comic Con, what would you walk the showroom floor as.

MS: I have done this and just gone with myself, which is the boring answer. But I love a good costume. I would go head to toe something really dumb. Something funny.

MS: I’d be milk. Because that is hilarious.

MM: Obviously, I’ve asked you the donut question many, many times. But I feel like I haven’t asked it from the perspective of yourself. If you were a donut, what kind would you be?

MS: I would be a blood orange, overly sweet–

MM: Final question, with the Earp curse kind of broken, the entire premise of the show is out the window at this point. What can fans expect to come… without spoiling anything of course.

MS: All I’ll say is… I think interesting character matches may occur.

MM: Layne Morgan told me to say that [laughs].