Imagine if Saturday Night Live had a witty, hilarious, often outrageous teenager… you’d most definitely get something close to All That. Nickelodeon’s 90’s hit comedy series revival stars Reece Caddell, a super-talented redhead, who packs the perfect punch of comedic timing and pizazz, proving that growing up in front of the camera on shows such as Hello Ladies, Fresh Off The Boat, and Coop and Cami Ask the World, sure does pay off.

Caddell, has taken on the iconic role (in addition to many others on the show) as the new host of Vital Information, a popular sketch on All That, originally played by Lori Beth Denberg. Talk about filling some wacky shoes. This well-seasoned young star chatted with FANDOMIZE about landing the role, trying to satisfy the OG All That fans, and beautifully attributes acting to that of ‘being brave.’

Now onto ‘vital information for your everyday life!’

MCKENZIE MORRELL: Landing the role on All That must have been an amazing feeling, can you talk a little bit about what has gotten you to this point? How did you start in the acting world…

REECE CADDELL: I’m pretty lucky that I have two older sisters who are actors and who helped pave the way for me. I started acting in commercials and tv/film when I was about 5 and pretty quickly booked my first recurring role on an HBO show Hello, Ladies with Stephen Merchant. It was fun to play and be on set and get snacks from craft services, hehehe! My sisters and I started a YouTube channel together when we first moved to LA and that has been something I am really grateful for—that we get to work together and I learned a lot about comedy from them! We’d watch kids tv and my very smart sisters would tell my parents it was ‘research’ for acting. I think it’s every kid’s dream to get to be on a Disney or Nickelodeon show and I am hyped that I’ve gotten to do both!

MM: Had you ever seen the original All That prior to getting this role?

RC: I had seen memes and clips on YouTube but hadn’t seen much of the show before the audition process. My uncle was helping me rehearse a character I developed for the audition when it was called ‘Untitled Sketch Comedy Show’ and he realized it was probably All That. He sat me down to watch some of the old episodes and I was like, please oh please let me be on this show!

MM: You took over the role in the Vital Information skit, an iconic character played by original cast member Lori Beth Denberg. Were you nervous to try and live up to her legacy, or were confident you could do it justice and put your own new spin on it?

RC: It is such an honor to step into Lori Beth’s shoes for Vital Information! I can remember when I saw the very first script with me in that role and I was like, oh dang, I better nail this or the OG fans are gonna be irate! So, no, I wasn’t especially full of confidence right at first, haha. But when we were rehearsing the first episode where Lori Beth transfers Vital Information to me, she sat with me and really gave me permission to make it my own. She has been hugely supportive of the new cast—all the OG cast have been so incredible to our cast!!

MM: Using 3 emojis, describe your experience so far on All That.

MM: The All That cast did a parody of Lizzo’s song Juice, which was hilarious by the way, what’s one song you wish you could make a parody of for the show?

RC: The song parodies we have been doing and the music videos are top notch, aren’t they? Oh my heck—SO GOOD!! The writers are so creative and our fantastic crew—from all the sets to the hair and makeup freaking KILL IT. It’s like stepping into another world when we film those and it’s literally jaw-dropping to see what they do. For a future music video parody, I’d love to see Ryan Alessi take on pretty much any Harry Styles song, heehee!

MM: Where do you draw inspiration from? Do you have any favorite movies, or comedians?

RC: My family is full of really funny people, so someone is always doing some funny bit. As the youngest in the family, my inspiration is mostly just trying to get them to laugh. But I definitely have people I admire—Kristen Bell, Liza Koshy, Andy Samberg and Kate McKinnon. They are all just so good. And my castmates! Both the OG All That cast and the current cast have taught me so much about committing to a moment and a character. They are incredibly funny and I learn from them all the time!

As for movies, the Jumanji movies are a sure bet to make me laugh out loud and I love the smart comedy in Mean Girls, The Princess Bride and Ferris Bueller’s Day Off. So good!

MM: What advice would you give the younger generation that wants to try their hand at sketch comedy or acting?

RC: I think it’s been important for me as an actor to find my groove, what I like to do, specifically. New actors say things like ‘I can play anybody’. But you really can’t. You have specific energy that helps you be unique—and that’s a GOOD thing. You are never going to be hired to play ‘Anybody’. So learn what you are good at and get better.

This past season while we were shooting All That I heard a great quote by Lucille Ball: ‘I’m not funny. What I am is brave.’ And that really stuck with me. Acting is really just being brave, I think. So do that—be brave.

MM: If you could never do comedy again, what genre would you give a go?

RC: Okay, we did a hilarious sketch called ‘A Silent Place’ based on the movie, A Quiet Place and so I had to watch it for, you know, research. And I fell in LOVE with the scariness of thriller films! I haven’t seen a lot in that genre yet, but the way the tension and story unfolds is just so satisfying! Or action adventure, preferably with a dragon. And, of course, anything that shoots in actual space. (Can someone please tell Tom Cruise that I can check my availability to work on his new film?) 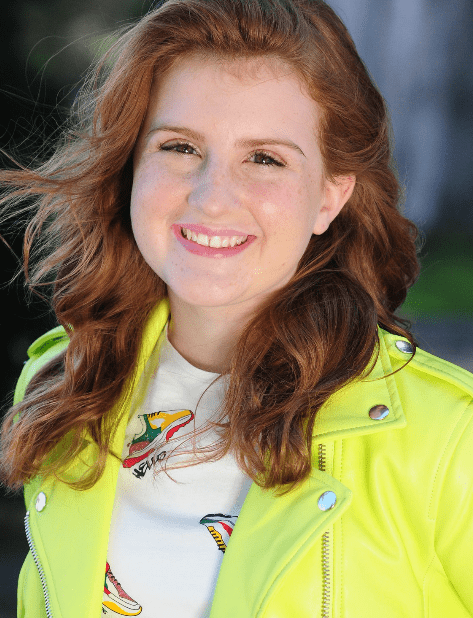 MM: You lived in Tokyo for a bit. That must have been a wild experience! What’s one thing they have there that is super useful that America should have? One thing you missed while living there?

RC: I really feel like Americans could get behind the awesome vending machines that are everywhere in Tokyo. The drink vending machines dispense both cold and hot drinks and you haven’t lived until you have a warm can of lemon tea in your pocket on a chilly day! I loved so many of the innovative things I saw in Japan! And yes, the warmed toilet seats are as amazing as you think.

I probably missed my oldest sister, Cameron, the most of everything when I lived there. She didn’t move over with the rest of the family and it was really hard. And the time difference made it harder. (Japan is 16 hours ahead of LA.)

And I missed American cheeseburgers. They just taste different in America than anyplace else I’ve tried them in the world.

MM: What are you doing to stay safe and sane during quarantine? Any new hobbies you’ve picked up during the downtime…

RC: I’m trying to finish school right now. I’m kinda limping towards the finish line and am at the point where I just want to be done and am struggling to stay interested, hehe. I’ve been working on drawing and I spend a few hours every day practicing. Aside from school, I am mostly annoying my sister, Maddy, and my cat, Oatmeal. I’ve been watching a lot of movies and an excessive amount of anime.

MM: If you could travel anywhere else in the world, where would it be and why?

RC: I’d love to go back to Japan! I really loved it there—the people are so kind and the food is amazing! For someplace new, I would have to say Brazil. It looks like such a beautiful place and like it would be super interesting! Also, I had a deep obsession with the movie Rio when I was younger and I really, really, really want to visit Rio de Janeiro.

MM: I like to add my signature question into all of my interviews. If you were to construct a donut based on your personality in real life what kind of donut would it be and what toppings would be on it.

RC: Oh my gosh, I love this question! Okay, while I would probably not eat this kind of donut (I’m more of a cronut girl) I think I would best be described by a strawberry lemonade donut with vanilla frosting and confetti sprinkles—warm and friendly, a little sweet, a little sassy, and with a pop of silly.

MM: In addition to acting, you also have a YouTube channel with your two sisters. Do you guys ever argue about what kind of content you want to create? Whether it’s vlogging or something more creative. How do you work through those disagreements?

RC: You know, we don’t really have strong disagreements about content, or much else, really. I think we really respect each other and are willing to give things a try…sometimes what we end up creating just comes down to how much time we have together. We started 3 Ginger Sisters to do sketch comedy, but vlogs are faster to make and for sketches, we all have to be there. I really hope we can work together more down the road in some way. I love working with my sisters.

MM: Lastly, anything you want to say to your fans? Or anything you’d like to share with the readers?

RC: Thanks for the chance to chat! It was so fun!! And any day we can talk about donuts is a win. I’d love to hang out more with your readers and fans on Instagram: @itsreececaddell

Shuya Chang and Jade Wu: The leading ladies of ‘Snakehead’